Famous footballer, Cristiano Ronaldo has been seen enjoying serious twerking from his boyfriend. 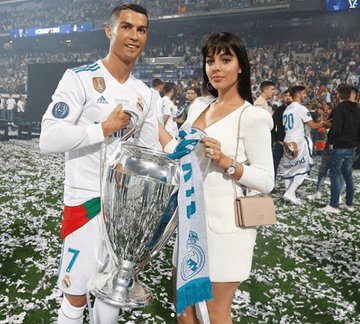 Ronaldo and his girlfriend, Rodriguez
Georgina Rodriguez, the girlfriend of Juventus star, Cristiano Ronaldo has been seen in a video twerking for the footballer.
Rodriguez, 26-year-old shared the lovely video to her 21.9 Instagram followers.
Rodriguez's video has now been watched over five million times already by fans all over the world.
A user wrote under the video: "I'm happy that I lived to see this."
Another user wrote: "This is why CR7 is the best in the world."
A third fan on Instagram wrote: "Ronaldo is the real GOAT."
Watch video below:
Top Stories