Ahmed was shot by armed anti-riot policemen on Tuesday, January 26, 2021, while protesting near the National Human Rights Commission. 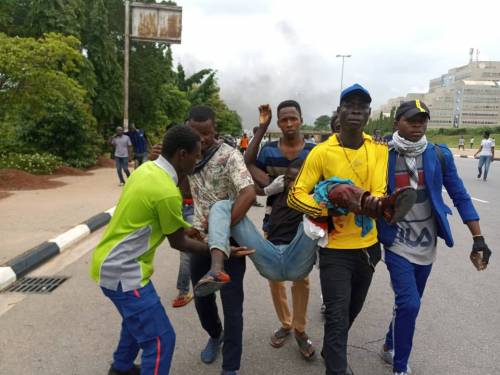 Police shot at Shiites during a rally in Abuja

According to SaharaReporters, the Nigeria Police Force has released the body of Kabiru Ahmed, a member of the Islamic Movement on Nigeria, popularly called Shiites.

Ahmed was allegedly killed by policemen during a protest in Maitama, Abuja, while demanding the release of their detained leader, Ibraheem El-Zakzaky.

Ahmed was shot by armed anti-riot policemen on Tuesday, January 26, 2021, while protesting near the National Human Rights Commission.

The peaceful protest was disrupted when they were attacked with teargas canisters and live ammunition leading to the death of two members –Yunusa Abdussalam, 22, and Kabiru Ahmed, 49.

Abdussalam was said to have been evacuated from the protest scene but he died shortly while receiving treatment in the hospital.

Meanwhile, Ahmed was captured by policemen after sustaining gunshot injuries in his left leg and later taken into custody, where he was allegedly tortured to death.
His left hand was also said to have been badly damaged.

Confirming the development, the Secretary, Academic Forum of the Movement, Abdullahi Musa, said the police had continued to commit crimes against humanity by killing their members for embarking on peaceful protest.

The remains of Ahmed were deposited at the Wuse District Hospital, Zone 3.

The group vowed that the killing would not stop them from protesting against the unlawful detention of their leader and his wife, Malama Zeenah.