The incident it was learnt caused panic among the passengers and workers at Nigeria’s busiest airport as the hall was filled with smoke. 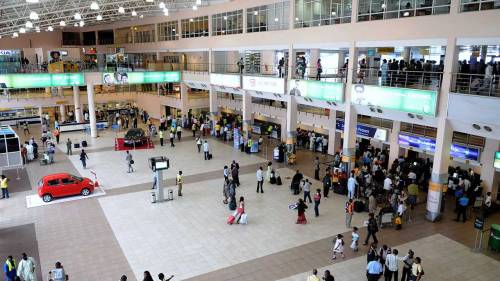 According to a report by SaharaReporters, there was serious panic and confusion among passengers on Wednesday following a fire outbreak at a section of the Murtala Muhammed International Airport, Lagos.

It was gathered that the incident occurred at the departure hall of the Kenyan airways at exactly 6:58am.

The incident it was learnt caused panic among the passengers and workers at Nigeria’s busiest airport as the hall was filled with smoke.

Firefighters of the Federal Airports Authority of Nigeria (FAAN), however, promptly responded to put off the fire.

“Good morning, please there was a minor fire outbreak near Kenyan airways’ office at International Airport building (MMIA) Lagos. The fire has since been put off by the airport fire service,” he said.

In January 2020, a fire incident was reported around the Runway End Safety Area (RESA) of the airport.

RESA is the surface surrounding the runway prepared or suitable for reducing the risk of damage to airplanes in the event of an undershoot, overshoot, or excursion from the runway.