Nigerian politician, Femi Fani-Kayode has been accused of misinforming people with his tweet on Iskilu-Wakili. 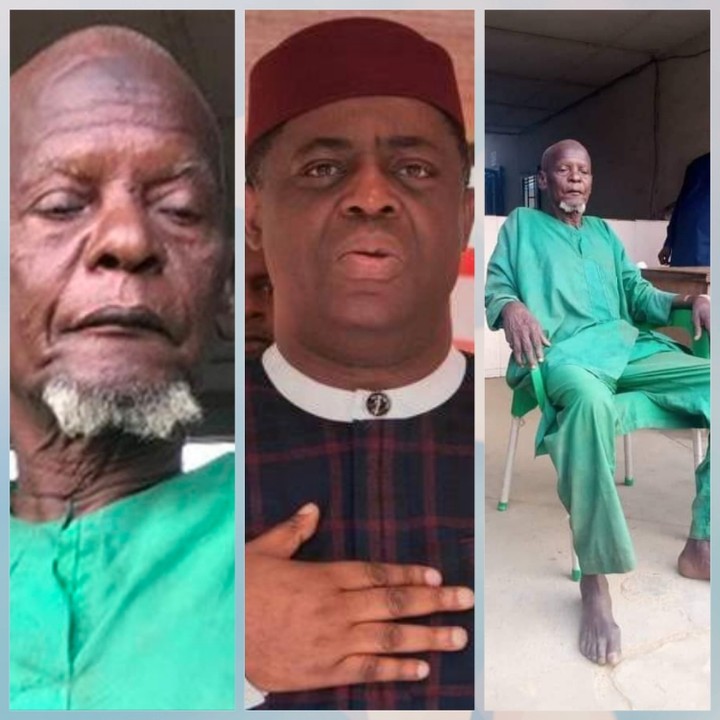 FFK and Iskilu-Wakili
The Oodua Peoples Congress has lashed out at a former Aviation Minister, Femi Fani-Kayode accusing him of misleading people over a tweet he released saying that the blind old man arrested by OPC is not the Fulani warlord, Abdullah Iskilu-Wakili.
According to TheIndependent, Oyo state coordinator of the Oodua Peoples Congress(OPC), Comrade Rotimi Olumo, speaking further on the matter, described the former minister as a spoiler, agent of destruction,and political featherweight that is reputed for changing narratives and misinforming the public.
Olumo, while reacting to the former minister’s claim that the kidnap kingpin apprehended and handed over to the police on Sunday was not Wakili,said Fani-Kayode utterances merited no response but because it came at a time when the chief tormentor of Ibarapa people is still in custody,it is reasonable to respond and clear the air on the issue.
He berated the Abuja-based politician, pointing out that the former minister remains one of the few politicians that thrive in telling lies and misinforming the public.
“Fani- Kayode has a reputation for using his social media page to foment trouble and cause disunity in Yorubaland. He had once said that Yoruba language was Anago. How can you take such a person too serious?”.
“I remembered former president Olusegun Obasanjo had said it once that Fani-Kayode can do anything for money and survival. He lives in Abuja, romancing with the north, yet he was the first to refute the claim that the kidnaper was not Wakili. Where did he get his information”? Olumo queried.
“With his untenable claim, I know and I am sure that the former minister is doing the bid of his paymasters, who are majorly from the north.He is the undisputed spokesperson of any politician that is ready to feather his nest”.
“He should be warned to stop drumming the beat of disunity in Yorubaland. Fani-Kayode was one of the few people that called and congratulated our leader,the Aare Onakakanfo of Yorubaland, Iba Gani Abiodun Ige Adams on Monday, on the success of the operation of the OPC, and the following day, he twisted the story refuting the claim that the man apprehended wasn’t Wakili”
“Fani-Kayode is very close to prominent politician in the north, yet none of them trusted him because they know that he is purely a political agent that cannot be trusted.He did everything to change every story. How can you take such a man so serious.
Narrating his experiences during the raid in Igangan, Olumo stated also that the operation that led to Wakili’s arrest and three other persons in Igangan lasted for over five hours, with a fierce battle ensuing between the OPC,the joint security operatives and the kidnappers,however, in the end, Wakili was apprehended, but his son, Abu escaped during the duel, using cows as cover”.
“Even the Ayete monarch, His Royal Majesty, Oba Emmanuel Okeniyi, and a prominent group in Igangan also corroborated our claims that Wakili is their major problem in Igangan, applauding the OPC for rising to the occasion at the most important moment.
The OPC chieftain, however,advised well-meaning Nigerians,especially, prominent Yoruba leaders and group not to trust the former minister with any information that is of national interest, because he has the tendency to spill the beans.
“I am using this opportunity to advise my brother, Sunday Igboho to be wary of Fani- Kayode’s antic and deceit because he is so smart in causing disunity in Yorubaland”.
Olumo, however, urged the the southwest governors, traditional rulers and all the leaders and stakeholders to support the OPC and the southwest security Stakeholders Group (SSSG)and other security outfits in ensuring that the southwest is safe for residents.
“Wakili’s story is a testimony of what OPC can achieve as a group with formidable structures across the country. So, in our desire to rid the southwest of criminal herders and kidnappers, we are determined to complement the efforts of the police and other security outfits
Top Stories