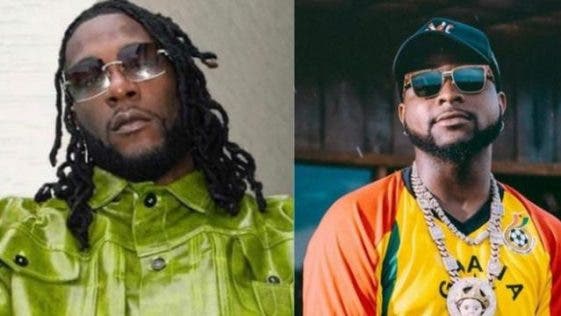 Burna Boy and Davido
Popular afro-beat musician, Burna Boy has thrown what appears to be a shade at Davido.
This is coming after he bagged his first Grammy Award.
Recall that the ace singer’s album, ‘Twice as Tall’ was named winner of the Best Global Music Album category, beating other nominees including Malian band Tinariwen and U.S. band Antibalas.
The Recording Academy making the announcement, tweeted;
”Congrats Best Global Music Album winner – ‘TWICE AS TALL’ @burnaboy #GRAMMYs”
Speaking in an Instagram Live session with celebrity dancer, Poco Lee, the self-acclaimed African Giant changed a slang coined by Davido, ”E Choke” and renamed it ”E hang”
A few hours after the historic announcement, the ”Ye” crooner was spotted with a group of friends having fun while also having an Instagram live session with Poco Lee.
Poco screamed ‘E choke’ in excitement, but in a subtle shade, Burna said; “E no choke again, E hang”.
Watch video below: