The photo which has gotten wide acclaim and coverage on social media was reportedly in the state of Georgia. 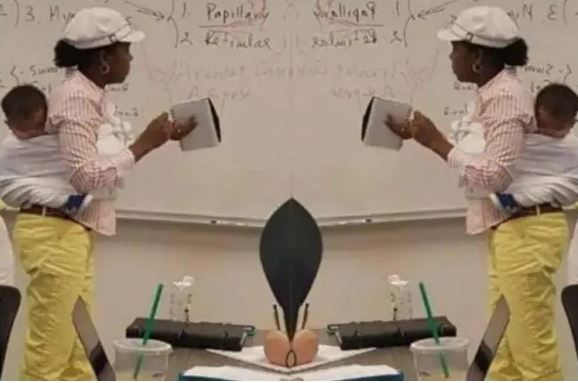 A photo has surfaced online showing the moment a black female professor was spotted backing her student's baby while lecturing in Georgia, United states.

The photo which has gotten wide acclaim and coverage on social media was reportedly in the state of Georgia, and in an American university (Georgia Gwinnett).

According to Facebook page, Shine Liberia, the woman was identified as, Ramata Sissoko, a Professor of Biological Sciences at the institution.

”What you see in this picture is not happening in Africa! This is the United States in the state of Georgia, and that is not enough to say: It is right in an American university (Georgia Gwinnett).

The black woman you see is no ordinary person on the street. It is indeed a Professor of Biological Sciences at this university. Her name: Ramata Sissoko. She has a Doctorate and more (obtaining a Doctorate in Science in North America is to be at the pinnacle of planetary knowledge in her field). It should be added that she is from Africa, from Mali 🇲🇱.

Let’s get back to the facts, now that the context is well established.

This Professor had hit the headlines in the United States by her beautiful gesture, gesture relayed by thousands on Twitter.

That day, a student mother who could not find a babysitter for her baby had to come to class with the child. The Malian teacher, instead of sending the student to the door for the child’s crying, was rather taken with compassion … like a real African woman.

She took the baby from the student, carried it on her back in a typical African style and taught the lesson for three hours. The child, very comfortable on her back, did not make a single noise during the three hours she gave the lesson. All the students could not believe this magic. Yes, it is magic in this part of the world.

But this Malian professor 🇲🇱 was unaware that this gesture, for her harmless, was going to make her much more popular than her status as professor of biological sciences.

Indeed, she had just taught two African values ​​to students and to the world: sympathy and maternal character.

Sympathy because it was kind enough to allow the student to enter class with a baby who cries every second. Other teachers would have applied the rules by showing the door to the student.

As for the maternal character, it is fully reflected in the carrying of the baby on the back, a practice absent in North America. In fact, in the African tradition, women have always carried infants on their backs. We think that there is a fundamental bond, a protection, and a love shared between the baby and his mother.

Yes, you have values ​​to keep and teach the rest of the world!