The suspects belong to a syndicate that specialises in sending kidnapping and assassination threat text messages to women asking them to pay a ransom or be kidnapped, raped and killed. 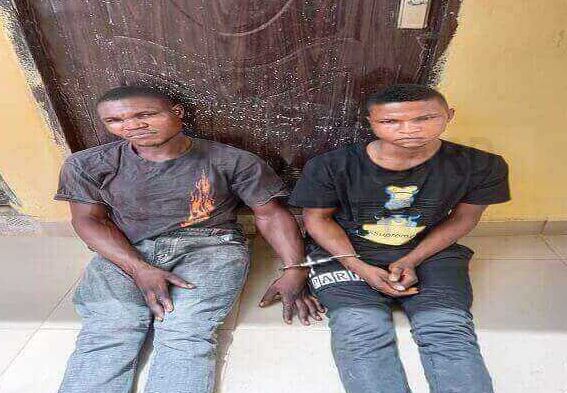 Two members of a notorious text-message kidnap syndicate have been apprehended by operatives of the Edo State Police Command.

The suspects were arrested by men of the Anti kidnapping And Cybercrime unit of the command through high technology and intelligence gathering.

It was gathered that the suspects identified as Mallam Zingbon and Ehis Joshua, belong to a syndicate that specialises in sending kidnapping and assassination threat text messages to women asking them to pay ransom or be kidnapped, raped and killed.

According to Standard Gazette crime correspondent, Festus Alenkhe, one of the suspects Mallam Zingbon from Plateau, was interviewed by a female entrepreneur who was to engage him as a private driver in Benin City.

However, on the day of his resumption, the suspect, who already had his employer’s phone number, called to say he was no longer interested. By then he allegedly contacted some gang members who encouraged him to issue the woman with kidnap and death threat messages.

Zingbon called the woman, threatened to kidnap, rape and kill her if she didn’t pay a ransom. In a series of text messages, Zingbon described the clothes the woman was wearing in an attempt to threaten her to submission.

The woman reportedly relocated to another city out of fear for her life. From there she informed the police, who used an advanced tracker to trace the suspects to their hideouts.

Speaking to Standard Gazette, the woman said she was shocked to learn the identity of one of her tormentors.

"I have a clean heart and wanted to employ the suspect but unknown to me that he has a different mindset. I must thank the police for saving me because I was now lodging in different hotels in Benin City and environs." she narrated.

The prime suspect, Mallam, claimed that he was misled by his friends and pleaded for forgiveness

“I was advised by my friends to get a telephone number to threaten the womàn so that she can give me some money. I am a security guard now in a house in the GRA in Benin city and l plead for forgiveness."

On his part, the second suspect, Ehis, said, “my offence now is because I gave my Bank account number to Mallam for the illicit act. I regret it, please."

Spokesperson of the command, SP Bello Kontongs, advised anyone facing similar threats to report to the police for prompt action.

“I got a signal on the incident, and I can confirm that two suspects were arrested for threat to kidnap using text messages and phone calls. The two suspects will be charged to court soon." he stated.