The women had taken to the streets over the continued arrest of youths who were the major forces protecting the area against banditry, among others. 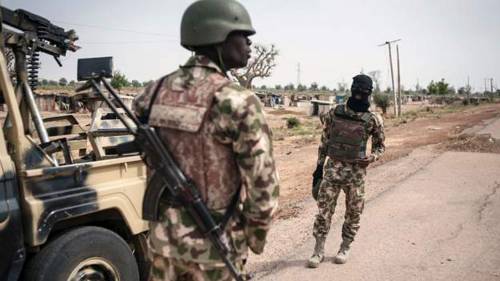 A youth in the Gora community, Southern Kaduna, identified as Josiah Akau, has narrated how soldiers attached to the area killed two women and brutalized others for protesting against the indiscriminate arrest of youths in the area, according to SaharaReporters.

According to Akau, the women had taken to the streets over the continued arrest of youths who were the major forces protecting the area against banditry, among others.

The resident said it was unfortunate that soldiers would go after the youths even when they have failed in their primary responsibility of protecting the area.

He said the women had protested around the military barracks in the area and insisted on seeing the commander.

Akau explained that the soldiers, however, asked the women to go back but they refused to leave the barracks.

According to him, the soldiers thereafter opened fire on the women, killing one Naomi John on the spot while two others shot were rushed to the hospital.

One of them later died.

He said the soldiers also beat the women, including his mother, adding that many of them sustained varying degrees of injury in the process.

"If the herders come and attack us at Gora, the soldiers will not do anything. Attacks have taken place at Gora in my presence, several times, I was there, nothing happened. The soldiers have not done anything, it is the youths that are struggling to protect the community, it is the same youths now that they want to arrest.

"What happened was, there was an attack on a young man in Gora by herders so the youths started hunting the Fulani people because the guy was attacked in the bush. We entered the bush and luckily enough, we apprehended the persons who killed the young man.

"Whenever bandits kill one of us, there will be no reaction from the soldiers but once you go to the bush and apprehend those who attacked you, there will be frustration on the soldiers' faces as if they are there to protect the Fulanis.

"Truly, there is no single Fulani man in Gora. It is only when they want to attack that they come. If the Fulani herdsmen are planning to attack, you will see a cow in Gora and that cow, even when you shoot the cow, the bullet will not penetrate its body.

“When we launched the manhunt in the bush, we caught some of the attackers with AK-47s and handed them over to soldiers.

"The soldiers' attempt to arrest the youths started when the district secretary went to bring Fulani herdsmen that we had sent away, to come and see the cow we took from the bush. He brought herdsmen to come and carry the cow and the youths disagreed. We pursued the herdsmen away, they ran into the bush

"Then the soldiers started arresting youths, telling them to go after the Fulani people and bring them back when the soldiers themselves know that the herders know about the bush more than us.

"The soldiers said they would arrest the youth leader of Gora, so they decided to go after every youth leader in Gora. They even started arresting any young man they saw and the women said no, this shouldn't be so, they came out to protest.

"The women of Gora protested, they wanted to meet the commander but a Muslim soldier said they should go back but they refused. The soldier cocked his gun and started shooting. When he killed that woman, others he shot fell. The women got angry because they were not armed but were shot at. Another thing that got them angry was that they had not tabled their request before the commander.

"The soldiers started beating them, brutally. Women started carrying stones and stoning the soldiers and the soldiers kept stoning back, the women ran. As they were running, some of them were falling. Anywhere any of them fell, the soldiers would descend on them and beat them.

"I was just returning from a journey, and people told me not to go to Gora that it was not safe. I said I had to be there. As I came into the community, I saw women with blood on their bodies. I said 'let's go to the general hospital'. Some followed, some refused because they felt the hospital would be unsafe. I begged the doctor to attend to those women. They stoned my mother too and she sustained injuries. Nobody slept on Tuesday in Gora."

Akau said the soldiers threatened that if they were forced to leave the area, herdsmen would come and kill all residents of the community.

"The soldiers are telling us that if they go, the Fulani herdsmen will come in full force and kill us all.

“Meanwhile, there was an attack that took place in December; herders entered a house and killed 11 people and the camp where the soldiers are is not up to 200 metres away from the house and there was no reaction to this.

"Youths did not start the fight, the herders had killed three people before the youths started reacting. The herders slept with two women in the Anglican church at Gora. We decided to be patient and they claimed we started the fight. That is a lie; the Fulanis have done enough.

"We are scared of going to the farm, people have not finished harvesting on their farms. You cannot go to the bush for fear of being attacked. If you go alone, they will seize your bike and sometimes kill the person in the bush.”

We Are Not Against Restructuring – IPOB