Nigeria's President Muhammadu Buhari has been accused of not commanding the respect of his service chiefs and Nigerians. 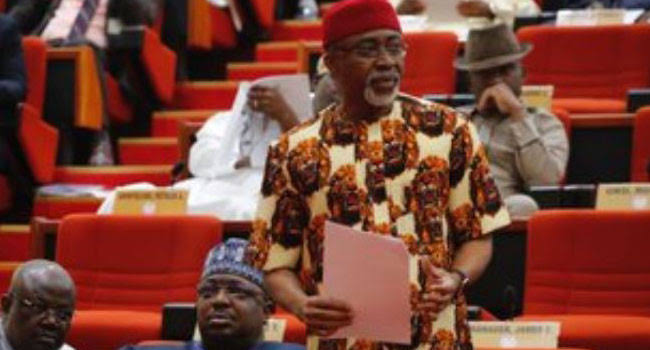 Abaribe
Nigerians and service chiefs no longer take President Muhammadu Buhari serious when it comes to the issue of tackling insecurity in the cournty, the Senate Minority Leader, Senator Enyinnaya Abaribe has stated.
Abaribe said even the Security Chiefs do not take Buhari seriously over the country’s challenges.
He made the remark in response to the marching order Buhari gave to Security Chiefs to go after bandits and kidnappers.
The president had issued the directive before embarking on his trip to the United Kingdom, UK, for medical check-up.
However, Abaribe while speaking on Channels Television’s Politics Today, on Wednesday, said: “Why would we take President Muhammadu Buhari seriously? Just the day after he had said we would no longer accept all these kidnappings, this would be the last, they kidnapped the last day.
“And those people are still there; those innocent Nigerians are still in captivity up till now. He always makes a statement. Every time these things happen, nothing happens. So it is obvious nobody takes him seriously with that. Even the military chiefs, I don’t think they bother themselves.
“This is about the umpteenth time that we are hearing the President giving a marching order. Throughout the Buratai time as the Chief of Army Staff, he was always giving marching orders so he has given just another one.”
Lately, Nigeria has been experiencing mass abduction by bandits.
Students and residents have majorly been the targets of these bandits.
States like Niger, Katsina, Kebbi and Kaduna States have been the most hit by the kidnappers.
While students and residents abducted in other states have been released, those of Kaduna are still in captivity.
Similarly, killer herdsmen have been on rampage in the Southern part of the country.
Top Stories