Apostle Johnson Suleman has lashed out at President Muhammadu Buhari-led government urging them to direct the energy the use in responding to criticism to bandits. 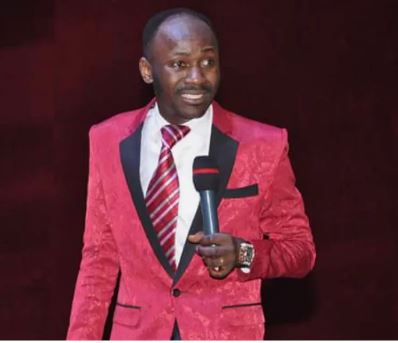 Apostle Suleman
President Muhammadu Buhari has been told to use the energy he invests in tackling critics to fight bantits.
The General Overseer of the Omega Fire Ministries International, Apostle Johnson Sulema made this known after the Presidency lambasted the Catholic Bishop of Sokoto Diocese, Matthew Kukah over his 2021 Easter homily, saying it is an ungodly attempt to politicise the nation’s security.
Kukah, in his Easter message, had said the greatest tragedy of Buhari’s government is the death of empathy, adding that the government’s clay-footed fight against corruption had not moved the needle of transparency forward.
He said Nigeria, being the poverty capital of the world came with its rewards such as banditry, violence, death, sorrow, blood, poverty, misery, and tears.
Kukah also said Nigeria’s leaders would manufacture consent by creating imaginary enemies, setting citizens against one another by deploying religion, ethnicity, region, and other platforms while appealing to the base emotions of patriotism.
In response to Kukah’s message, the President’s Senior Special Assistant on Media and Publicity, Malam Garba Shehu said the Catholic Archbishop of Sokoto Diocese, said things that were inexplicable.
According to the presidential aide, it is wrong for Kukah to have stated that ”the Boko Haram terrorism is worse than it was in 2015.”
Shehu also knocked Bishop Kukah, saying he didn’t speak like a man of God.
However, Apostle Suleman in his reaction on Monday said it baffles the mind how the presidency keeps mum when Nigerians are being killed but very swift when it’s time to respond to critics.
Apostle Suleman said: “You are tempted to think we don’t have leadership in Nigeria when people are been killed.
They appear so helpless in the face of the insurgency. But as soon someone speaks truth to power, their swift response and reactions amaze you. PLEASE, RESPOND TO BANDITS, NOT CRITICS.”
Top Stories