A woman from Mali has made history in Africa by giving birth to nine babies. 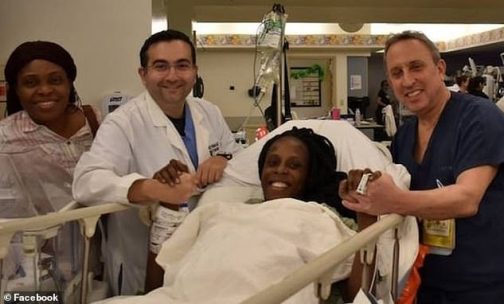 Halima Cisse
A woman has shocked the world by giving birth to nine babies.
The Malian woman who made history in the continent has been identified as Halima Cisse.
She gave birth to nine babies on Tuesday – two more than doctors had detected inside her crowded womb.
She joined a small pantheon of mothers of nonuplets.
The pregnancy of Halima Cisse, 25, fascinated Malians and attracted the attention of its leaders.
When doctors in March said Cisse needed specialist care, authorities flew her to Morocco, where she gave birth.
“The newborns (five girls and four boys) and the mother are all doing well,” Mali’s health minister, Fanta Siby, said in a statement.
Cisse was expected to give birth to seven babies, according to ultrasounds conducted in Morocco and Mali that missed two of the siblings.
All were delivered by caesarean section.
Nonuplets are extremely rare. Medical complications in multiple births of this kind often mean that some of the babies do not reach full term.
According to an entry in Wikipedia, a set of nonuplets born on 13 June 1971, in Sydney, Australia by Geraldine Brodrick, five boys and four girls did not survive for long.
Two of the boys were stillborn and the last surviving of the babies, named Richard, died six days after birth.
The set of nonuplets, five boys and four girls, born on 26 March 1999, in Malaysia by Zurina Mat Saad did not survived more than 6 hours.
However, medical science in the past two decades may keep the babies alive.
Top Stories