Sheikh Gumi Is A Terrorist, He Should Be Arrested And Jailed - Nigerians Cry On Twitter


Nigerians on Twitter have expressed shock after Sheikh Ahmad Gumi was seen in an interview defending bandits.

Gumi and bandits
Nigerians on social media have called for the arrest of Kaduna-based Islamic scholar, Sheikh Ahmad Gumi,.
The call was as a result of a recent interview he granted to AIT in which he was defending bandits that have been killing and kidnapping innocent Nigerians.
Recall that the religious leader had met with bandits on many occasions. He also maintains a communications link with them and has assumed the role of being their image launderer and chief spokesman.
On Tuesday, he urged the federal government not to take lightly the threat of the Ansaru terrorist gang that kidnapped students of Greenfield University, Kaduna.
Gumi, who stated this in an interview with Punch said the Central Bank of Nigeria should pay the N100m ransom being demanded by the kidnappers.
In a separate interview African Independent Television, Kakaaki, AIT on Tuesday, the cleric said he found out Boko Haram kidnapped students of Greenfield University, not bandits. that he came to the conclusion after he traced them.
Gumi further lamented that the Nigerian state has done many injustices to the bandits, and they do not lead any luxury life.
He said they use the ransom money to buy weapons because they’re under pressure to fight the government back.
“All these amounts of money they collect, they are buying weapons. Why do you buy weapons? They say they are under pressure to fight the government. The government that has been bombarding us with helicopters.
“So remove the pressure, the need for the money is there, when you go there you don’t see any luxurious life, they are living in huts, they have nothing, sometimes they drink from the stream.”

Gumi also blamed the government for not ameliorating the herdsmen’s plight, who he said, have gone through a lot of hardship.
“Not one kobo from Nigeria’s budget goes to them,” he said.
The wild statement took many aback, as they wondered how a renowned cleric would continue to openly associate with bandits.
Many Nigerians wonder why he has not been arrested and charged with being an accessory to terrorism, murder and kidnapping..
Read some social media reactions below;

Sheikh Gumi is a serious threat to National Security. He knows the whereabout of the kidnapped Greenfield University Students

A detribalized government would have arrested this terrorist, a long time ago. The DSS is yet to pick him up, bcos he is doing the bidding of this regime https://t.co/37yWIXpt5G 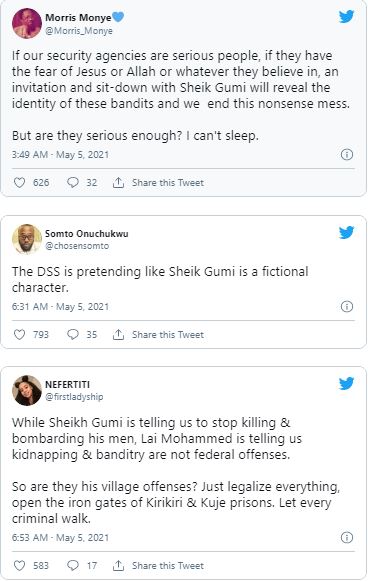 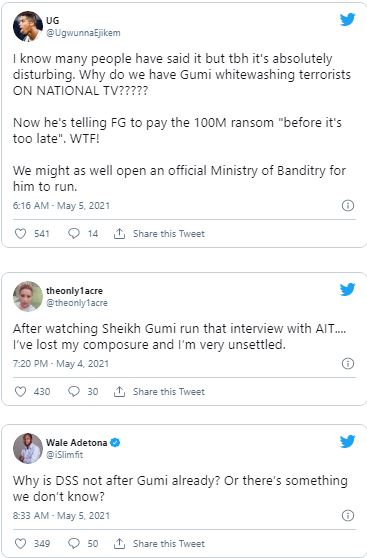 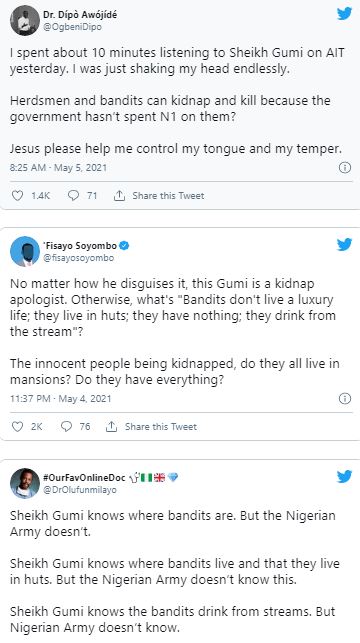 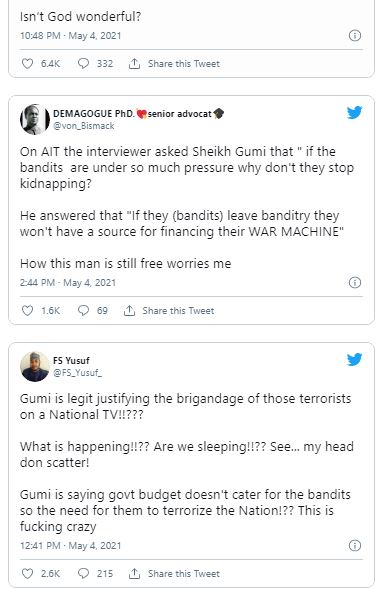 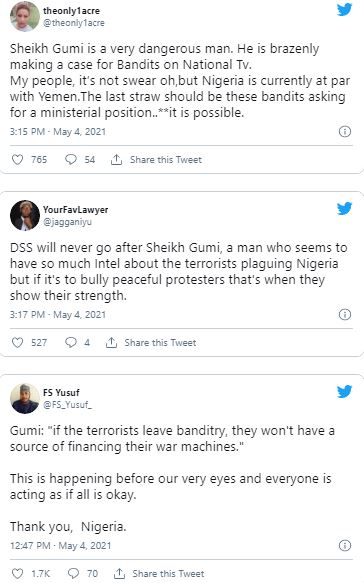