Parents of the students of Federal College of Forestry Mechanisation, Afaka have appreciated Nigerians. 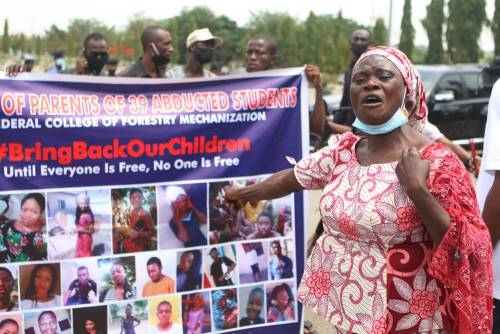 Parents of recently released students of Federal College of Forestry Mechanisation, Afaka
Following the release of the 27 abducted students of the Federal College of Forestry Mechanisation, Afaka, Kaduna State, their parents have thanked Nigerians for supporting them.
In a statement by the parents on Friday, jointly signed by the forum's chairman, Malam Abdullahi Usman and Secretary, Mrs Catherine Y. Saleh, the group of parents also expressed their appreciation to Nigerians and specially thanked some prominent Nigerians and organisations for the roles they played to secure the release of their children.
"We extend profound gratitude to all Nigerians and lovers of humanity at home and abroad who showed up and showed out in solidarity as we went through the dark horrendous period of waiting and hoping for the return of our children.

"We are unable to thank nearly enough every one who stood by us and for the sacrifices you made in your various capacities financially, morally, spiritually and otherwise.
"We most especially register our immense gratitude to former Presidents Olusegun Obasanjo, and Abubakar Abdulsalami, Sheikh Ahmad Abubakar Mahmud Gumi, and the Provost of the College, Dr Usman, for the various roles they played in securing the release of our children.

"We appreciate immensely the students and staff of the Institution for their relentless solidarity.

"The journey is not yet over because our children will definitely require rehabilitation to overcome the trauma that accompanies such ugly experiences.
"We therefore call the Minister of Environment, the Managements of FRIN and the College of Forestry Mechanisation, to ensure that all the students are well rehabilitated so that they may get back to normal life again and continue with their education.

"We pray for the repose of the soul of Malam Ibrahim, one of the parents of the abducted students, who died as a result of the trauma that resulted from the abduction of his daughter. We also pray for the souls of the 5 Greenfield University students who were killed by their abductors and ask God to grant the remaining students speedy release because we understand what the parents are passing through.

"We call on government to get more serious and aggressively pursue safe schooling as a pertinent agenda so as to give parents the confidence to send their children to school because if the schools remain as security porous as they now are, many may not find it worth the trouble to enroll their children in schools anymore," the statement said.
The parents also clarified that 27 students were released and not 29 as some media organisations have reported.
"We, the parents of the 27 students of Federal College of Forestry Mechanisation, Afaka, Kaduna, have met and reviewed one of the most important matters in our lives, which is the release of our children by armed bandits.
"You would recall that the students were abducted on 11th March, 2021.
"It is, first and foremost, pertinent for us to effect an important correction on the number of the released students. They are 27, not 29, as reported by some nations media. The total abducted students were 39, out of which 2 (two) escaped not long after abduction, 10 were released in 2 batches of 5 each, leaving the remaining 27, who were released yesterday, Wednesday 5th May, 2021, 56 days after their abduction.
"We, as parents, made several efforts to secure the release of the students. We even took our peaceful march to the National Assembly on Tuesday, 4th May, 2021, presented our plight and prayed for the intervention of the lawmakers in securing the release of our children.
"We are grateful that we did not leave any stone unturned on the path to where we have arrived today.
"The 27 released students were received at a location in Kidanda, Giwa Local Government, and conveyed to Kaduna.
"On arrival in Kaduna, they were taken to the Police College Clinic for  medical checkup," it said.
"Finally, we thank God Almighty for the victory he has granted us. He has done for us what no man can do.
"We thank you sincerely and pray that Kaduna State and Nigeria will return back to the days where we can all sleep with our two eyes closed," it added.
Top Stories