Governors from the Peoples Democratic Party are currently meeting in Ibadan, the capital of Oyo state. 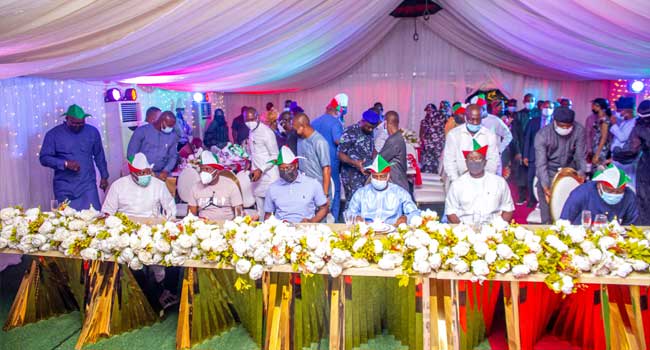 PDP governors meeting in Oyo state
Ahead of the 2023 presidential election and the disturbing insecurity issues in the country, thirteen Peoples Democratic Party Governors have met in Ibadan on Monday.
The meeting is currently holding at the International Conference Centre of the International Institute of Tropical Agriculture, IITA, Ibadan on Monday.
The governors are:  Aminu Tambuwal of Sokoto State;  Samuel Ortom of Benue; Douye Diri of Bayelsa; Okezie Ikpeazu of Abia and Emmanuel Udom of Akwa Ibom.
Others are: Ifeanyi Okowa of Delta,  Ifeanyi Ugwuanyi of Enugu State, Umar Fintiri of Adamawa; Bala Mohammed of Bauchi State, Nyesom Wike of Rivers and Godwin Obaseki of Edo.
Also present is the host governor,  Seyi Makinde  of Oyo State and the Deputy Governor of Zamfara, Aliyu Gusau who represented Gov. Bello Matawalle.
It is expected that Gov. Darius Ishaku, of Taraba and Gov. Ben Ayade, of Cross River would join them as the meeting progresses.
The governors who arrived the conference centre at exactly 1:10 pm in a coaster bus went into a closed  door meeting.
NAN gathered from the venue that the meeting would focus on the security situation in the country.
NAN also gathered that the meeting being presided over by Chairman of the PDP Governors” Forum,  Gov Aminu Tambuwal would discuss other issues relating to the progress of the party.
It is expected that a communique would be issued at the end of the meeting.
Top Stories