A man who recently got married has died while cheating with two women after falling from hotel balcony. 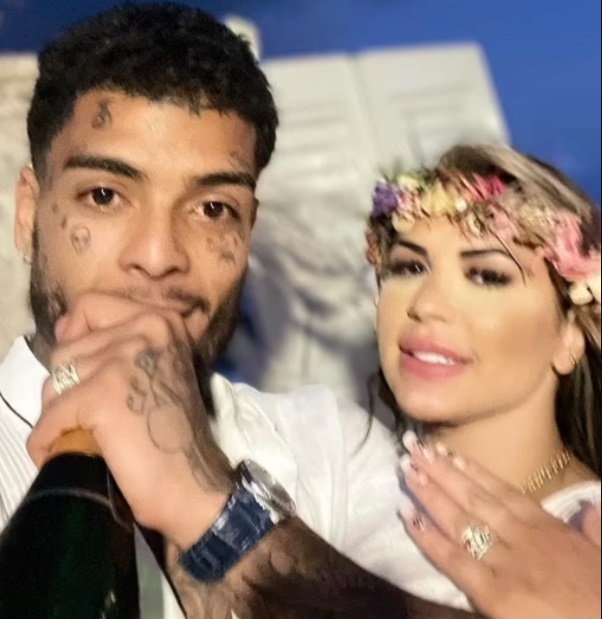 Kevin and wife
Mc Kevin, a popular Brazilian DJ has fallen to his death from a hotel balcony while cheating with two women as he attempted to hide from his wife.
The newly married man is a friend of footballer Neymar.
He reportedly died after jumping out of a hotel window as he tried to escape being caught having an affair with two women he had invited for threesome.
Kevin Nascimento Bueno, 23, panicked that his wife was about to catch him having a threesome with a model and a friend, it is claimed. To prevent that, he jumped from a fifth-floor balcony at a hotel in Rio and died in hospital from the injuries he sustained.
According to Folha de Sau Paulo, MC Kevin tried to jump to the balcony located in the room below, but misjudged the distance and ended up crashing into the side of the swimming pool at the hotel.
Extra Globo, the model he was with, Bianca Domingues, 26, said she met MC Kevin, 23, and his singer friend Victor Fontenelle outside the Brisa Barra Hotel in Rio De Janeiro. Domingues said she was then invited to the popular singer’s suite Sunday evening, May 16.
Domingues and Fontenelle - the women MC Kevin was allegedly having a threesome with - told authorities that MC Kevin was afraid that his wife, criminal lawyer Deolane Bezerra, 33, would show up at the hotel room and catch him cheating on her.
The singer and Deolane Bezerra had gotten married just two weeks earlier with a lavish party in Tulum, Mexico.
Police testimony showed that Deolane Bezerra, who was staying in room 1302 in the same hotel, had been searching for her husband after he had failed to pick up her phone calls and reply to her text messages.
Fearing he was about to be caught by his wife, MC Kevin, who was in room number 502, subsequently tried to jump to the balcony located in the room below, but lost his footing and plunged five floors, landing by the side of a swimming pool.
After news of the Brazilian's death surfaced, Footballer, Neymar, took to social media to express his heartbreak.
Top Stories