The video, according to Twitter, might have violated the rules or ”may be in response to a valid and properly scoped request from an authorized entity in a given country". 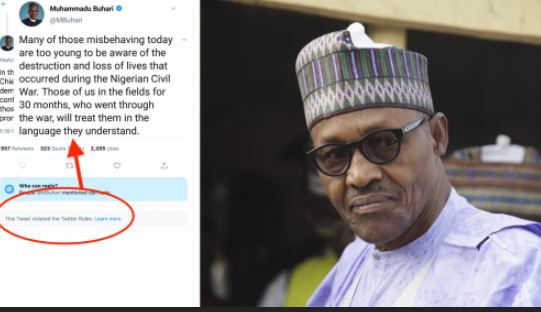 Twitter, the popular microblogging platform, has yanked off a video which showed President Muhammadu Buhari threatening to deal with youths of the South-East.

The video, according to Twitter, might have violated the rules or ”may be in response to a valid and properly scoped request from an authorized entity in a given country".

The video was initially posted on the official handle of the Government of the Federal Republic of Nigeria, @NGRPresident, where Buhari warned that ‘rude shock’ awaits unpatriotic elements promoting insurrection and burning critical national assets across the country.

In the video, Buhari noted the role he played alongside other Nigerian military officers in the Nigerian Civil War of 1966-70, which led to the murder of over three million Igbos.

The last part of a Twitter thread transcribing the president’s address was taken down by the app on Wednesday.

This was after many Nigerians reported massively, Buhari's Twitter account likening the tweet to comments made by former United States President, Donald Trump which caused his ban from the social media app.

Meanwhile, Lai Mohammed, Nigeria’s information minister, has accused Twitter of not being clear in its standard for deleting tweets, implying the US company has a longstanding bias against the Nigerian government.

“The mission of Twitter in Nigeria is very very suspect,” Mohammed said.

“Has Twitter deleted the violent tweets that Nnamdi Kanu has been sending? The same Twitter that was funding #ENDSARS protesters… When people were burning Police stations and killing policemen, for Twitter it was about the right to protest. But when a similar thing happened at the [US] Capitol, it became an insurrection.

“Twitter’s mission in Nigeria, citing those two examples, is very suspect. What is their agenda?”