The security operatives also barricaded the expressway, limiting the numbers of vehicles that could gain access to Lagos. 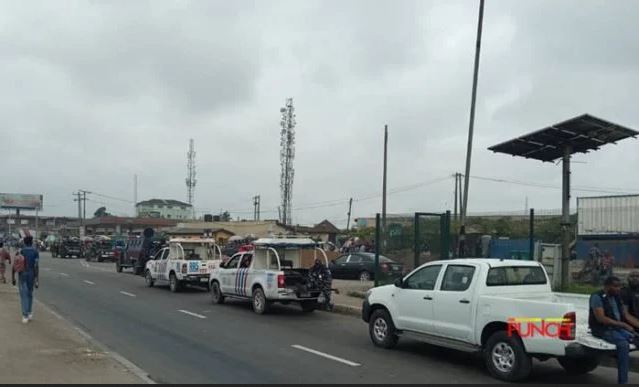 According to a report by The PUNCH, many commuters on the Berger axis of the Lagos-Ibadan Expressway suffered delay as security operatives stopped passenger vehicles in search of Yoruba Nation agitators.

The PUNCH correspondent, who passed the expressway, noticed that there is traffic in-bound of Lagos, causing about 15 minutes delay.

The security operatives also barricaded the expressway, limiting the numbers of vehicles that could gain access to Lagos.

The number of vehicle that could access Lagos State from Ogun State reduced to two instead of four.

They also blocked the routes leading to the venue of the protest and positioned vehicles at strategic locations.

During the search at Ketu, one of the policemen asked if posters in or banners were in the vehicle.

Some of passengers were also checked and asked if they had any weapon on them before diverting the vehicle to another route.

At both locations, some passengers were asked where they are coming from and going to.

The PUNCH had reported that the atmosphere at Gani Fawehinmi Freedom Park, Ojota, Lagos, is charged ahead of Yoruba Nation mega rally slated for today.

Armed policemen and soldiers attached to OP MESSA were seen in patrol vans and armoured vehicles stationed in strategic points around the park where the rally is billed to hold.

Our correspondent could not sight any agitators as of 09am.

The Lagos State Police Command had in separate statements, on Thursday and Friday, warned the agitators to shelve the rally.

However, the Umbrella body of Yoruba Self-Determination Groups, Ilana Omo Oodua, said that the pro-Yoruba Nation’s rally scheduled to hold in Lagos State on Saturday will go on as scheduled.

The group, which is headed by a Renowned Historian and Second Republic Member of the Nigerian Senate, Emeritus Professor Banji Akintoye, made this known in a statement on Friday.

The statement made available by the group’s spokesperson, Mr Maxwell Adeleye, was titled, “Yoruba Nation’s Rally To Hold Tomorrow in Lagos – Ilana Omo Oodua … Writes Sanwoolu, Odumosu, Says “It is the duty of Police to ensure the rally is not hijacked by hoodlums”.

“On no account will any actual or rumoured activity, including the planned mega rally, be allowed to lock down the state or hinder the normal daily activities of the good people of Lagos State, the Commissioner of Police, CP Hakeem Odumosu, had earlier said at a media briefing held in Alausa, Ikeja, on Thursday.