The worst hit community is Nsude, where residents have been living in trepidation, even as many youths have continued to express fear of further collapse of their farmlands. 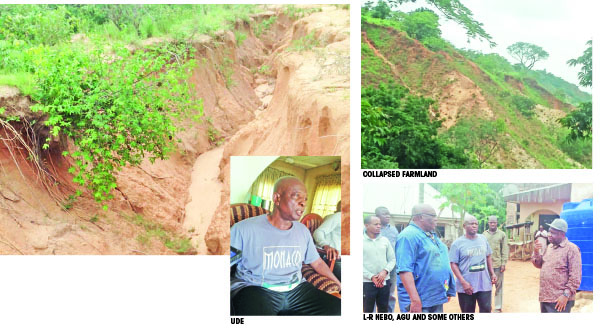 It is now almost a decade that the people of Ebe, Nsude, Nachi and Umulumgbe, all in Udi Local Government Council of Enugu State have been living in palpable fear due to frequent collapse of abandoned coal mines in their communities, thereby leading to loss of expanse of land and huge economic trees.

Saturday Sun gathered that the worst hit community is Nsude, where residents have been living in trepidation, even as many youths have continued to express fear of further collapse of their farmlands.

Investigation by Saturday Sun revealed that coal mining started in Enugu State, particularly in the Nsude area, as early as in the 1920s following the coal discovery in 1909. The Nsude drift opened six years later. The Enugu mine’s operations and others in the country were merged into a new corporation in 1950: the Nigerian Coal Corporation. The NCC was tasked with exploiting coal resources, and held a monopoly on coal mining, production, and sales until 1999.

Nigeria’s coal industry suffered a blow in the 1950s when oil was discovered. Up until this point, the Nigerian Railway Corporation was the largest consumer of coal in the country. However, after the discovery of oil, the railway corporation began to replace its coal burning trains with diesel-powered engines. An additional negative impact came when the Electricity Corporation of Nigeria began converting its power generation equipment from coal to diesel and gas as well.

The Nigeria Civil War also negatively impacted coal production; many mines were abandoned during the war. Following the war, production never completely recovered and coal production levels were erratic. Attempts at mechanising production ended badly, as both the implementation and maintenance of imported mining equipment proved troublesome, and hurt production. After the civil war, the Nigerian coal industry has not been able to return to its peak production in the 1950s.

In 2002, work stopped at the NCC-operated mines. In 2003, the Nigerian government announced plans to create a technical advisory committee that would be tasked with reviving Nigeria’s coal industry.

By 2004, the technical committee had still not issued their report, and the NCC found itself almost bankrupt. To raise funds, it began to sell off some of its assets in an attempt to pay off its mounting debts, including salaries owed to its employees.

Additionally, the Enugu State Government protested the planned NCC privatisation and demanded the ability to consult with the Federal Government on any planned sale.

Following the above development, the coal mine sites were abandoned and subsequently deteriorated to the point of sliding.

Recently, following the reported case of collapse of the farmlands in the area, people of the area have become despondent. And according to one of the citizens of the community, they cannot help themselves.

In a chat with Saturday Sun, Chairman, Umuaka Community, Nsude in Udi, Chief Anthony Ude told our reporter that it has been a trying and difficult moment for his community as the ugly situation had  drastically affected the agricultural output of the community, thereby forcing many families into abject poverty.

According to Chief Ude, though his community is the worst hit, the people are yet to get any solution and help from the state and federal governments.

Said he: “Each time we go to the farm, you will discover that a large chunk has been swallowed up. The last one happened last year. Though there was no casualty, it is usually a challenge for our people during the rainy season. This is because the soil has become so weak.

“We have lost our cashew plantations, palm tree plantations and other economic trees to this ugly situation. The most disturbing part of it is that it is becoming worse every year.”

Estimating the financial damage caused by the destruction, Chief Ude put the loss experienced by the community at over a billion naira.

Expressing his worry, he said: “Because the distance between where we live and the areas that have been taken over are not far, we are so much worried that one day we may wake up to see that our land has caved into the abandoned underground.

“Again, the collapsed areas have turned into very big erosion sites threatening the existence of our community.”

One of the farmers in the community, Mr. Ernest Eze told our reporter that he has lost over N5m worth of corn to the ecological disaster.

His words: “Last year, I cultivated corn worth about N5m using tractors. The corn was on the verge of harvest when the farmland caved in and destroyed my farm. I nearly committed suicide. In fact, I didn’t know I would recover from the shock of the loss. Unfortunately for me, I never got any relief from anybody since the incident.”

Eze called on the federal and state governments to expedite action to see that the coal mine channels are properly closed to avoid subsequent collapse of the land in the area.

Another young man living in the area, Mr. Stephen Agu told our reporter that life has been uncertain for the people since the frequent collapse of the land.

Said Agu: “We are currently living in fear in this community. As I am talking to you, some of our brothers have lost considerable number of hectares of land to this landslide. These things are happening in the place where our own generation is supposed to move in, settle down and build houses. But they have become a no-go area. Few years ago when one of my brother wanted to build a house, after erecting and roofing the house, the land collapsed and the entire building caved into the earth. That’s how he lost his new building and resources there.

“You can see here in our community that there are not many new buildings. This is not because we don’t have resources to build houses but because you don’t know where the mine has eaten up the earth.”

“Nsude is our community. We don’t have any other place to go. We are appealing to the authorities to come to our aid. If things should continue like this, then this community will go into ecological disaster. We call on them to come and properly close the mines in all the areas concerned.”

Saturday Sun gathered that the area so affected covered many hectares of land, covering both farm and residential land.

Speaking to our reporter while inspecting the affected areas, a former Minister of Power, Prof. Chinedu Nebo, who is also the Chairman of the Board of Trustees of Agbaja Leaders of Thought (a socio-cultural group, made up of prominent and intellectual people from Udi, Ezeagu and Enugu North Local Government Areas), noted that from the geological survey, the underground mines were more than 500 metres on normal routes and sometimes 1000 metres at intersections.

Prof. Nebo who was accompanied to the community by Prof. Agu Gab Agu, Secretary of the BOT of Agbaja Leaders of Thought, expressed concern that the affected communities could be buried alive suddenly, due to the poor closure of the mines.

“Agbaja people are building on the surface of the earth and carrying on other developmental activities while their underbelly is open. There is no proper marking or caution signs to show that a certain area was mined underground.”

Nebo, who was also the former Vice Chancellor of University of Nigeria, Nsukka (UNN) said that his group would make a formal case to the Federal Ministry of Mines and Solid Minerals and the Ministry of Environment, as well as Enugu State Government. He said the attention of the relevant authorities would be sought on the predicament of the community, damages on their economic trees and farmlands and the degradation of their environment.