The mother of one also lamented about the current challenges she’s been having to deal with on the movie set. 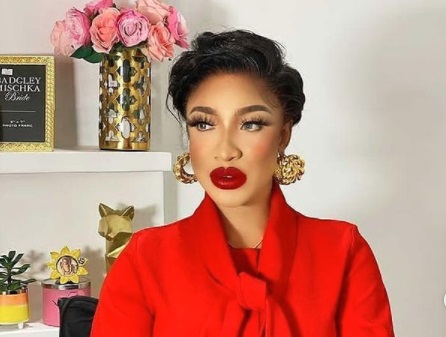 Tonto Dikeh
Tonto Dikeh has revealed that her heart is no longer in acting.
This comes after the 36-year-old movie star recently announced she would be gracing the TV screen in a new movie titled ‘Beggars Children’ after several years of taking a break from Nollywood to focus on her family’s personal development, humanitarian foundation and leadership programmes.
However, in a more recent Instagram post, the mother of one lamented about the current challenges she’s been having to deal with on the movie set.
According to Tonto Dikeh, she’s been on set with one of the most amazing colleagues and crew but the job seem such a herculean task and that because her heart is no longer in it thus, making it difficult for her to want to continue.
Speaking further, Tonto said her new project regrettably made her miss church.
Tontolet wrote: “I missed church because of Nollywood… Don’t understand how I let this happen… This film thing is frustrating… But am grateful to work with amazing colleagues but this life isn’t for me… I look and feel sick…
“My director and producer have been so amazing to me on the set. Actually, 1 of the most professional crew and set I’ve seen in years… BUT MY PROBLEM IS MY HEART LEFT A LONG TIME AGO… It’s hard now…”
Top Stories