It happened after he appeared as a guest of Atlanta United to hammer the Golden Spike, one of MLS’s most unique rituals. 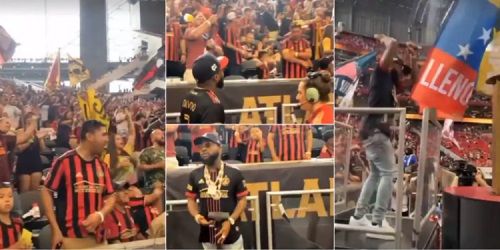 Davido appears hammers the golden spike
Popular Nigerian musician, Davido has made history by becoming the first African pop star to appear at the Atlanta Golden Spike.
It happened after he appeared as a guest of Atlanta United to hammer the Golden Spike, one of MLS’s most unique rituals.
He was invited by the beloved people of Atlanta to kickstart the Atlanta United FC MLS match against Columbus FC at the Mercedes-Benz Stadium in Georgia, thereby earning the title of a golden spike hitter.
The Mercedes Benz Stadium is same one American rapper and top fashion designer, Kanye West used for his “Donda” (10th solo studio) album listening party which happened on Thurdsay night, July 22, 2021.
The “fem” crooner shared clips from the exciting moment and how the crowd went wild when he stepped on the podium to hit the spike.
The 30 BG boss shared clips from the exciting moments as it showed him and his manager, Asa Asika at the stadium.
Donned in a t-shirt with his name boldly inscribed at the back and trousers, the singer wore a face cap as he climbed up a podium to hit the spike.
While he was climbing, thousands of white people at the stadium were heard screaming happily.