The suspect was nabbed while allegedly trying to burgle a house in the community after scaling a fence. 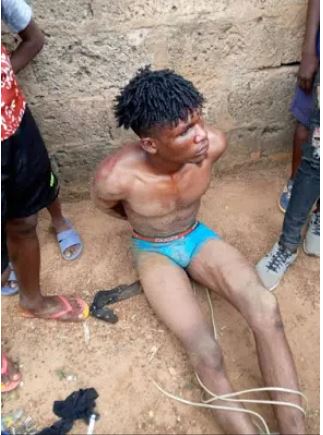 According to a report by Daily Post, some angry youths of Danialu Upper Gaa-Akanbi area in Ilorin, Kwara state's capital on Friday August 6 apprehended a suspected serial burglar identified as Aina Toheeb.

The suspect was nabbed while allegedly trying to burgle a house in the community after scaling a fence. He was apprehended after a resident saw him and raised an alarm.

An eyewitness said; “I saw the young man who I suspected to be a thief jumping into the compound through the fence and entered one of the apartments on the premises.

“I immediately raised an alarm and the action drew the attention of everyone in the neighbourhood who later gave him a hot chase.

“The suspect must have been on the business for long considering the way and manner he was jumping over several fences including a security fence and maneouvering his way in order to escape."

The suspect who was caught with a black bag containing different metal objects suspected to be magnetic irons and different sizes of keys which he allegedly uses to carry out his operation, confessed to being a professional burglar that had burgled several apartments around Danialu and within Ilorin.