The relatives, flown to the nation’s capital, Abuja, were among the 101 stranded Nigerians in Libya. 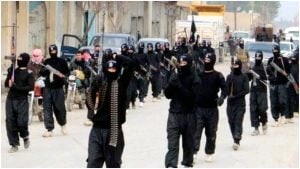 ISIS terrorists
The Federal Government of Nigeria has brought back at least 22 family members of slain Islamic State (ISIS) fighters, according to a report by DailyPost.
The relatives, flown to the nation’s capital, Abuja, were among the 101 stranded Nigerians in Libya.
Head of Media, National Diaspora Commission (NIDCOM), Abdur-Rahman Balogun confirmed the return in a statement.
Those brought back were received by officials of Foreign Affairs Ministry, NIDCOM, Nigeria Centre for Disease Control (NCDC), National Drug Law Enforcement Agency (NDLEA).
Others were National Emergency Management Agency (NEMA), Department of State Services (DSS), Nigeria Immigration Service (NIS) and Port Health.
“The stranded Nigerians include the 22 family members of suspected former members of ISIS that were killed in Libya as well as their children,” Balogun said.
Balogun said all evacuees came with negative PCR test for COVID-19, and landed at Nnamdi Azikiwe International Airport GAT wing, aboard Airforce C130.
Since the fall of Muammar Gaddafi, groups loyal to ISIS fighters still control some areas in Libya.
President Muhammadu Buhari, federal and state government officials often link the crisis in the North African nation to the influx of bandits as well as the proliferation of arms and ammunition.
At the weekend, Katsina Governor, Aminu Bello hinted that the Islamic State West Africa Province (ISWAP) is trying to is establish bases in the North-West region.
Top Stories