Reports that the army is secretly recruiting repentant Boko Haram terrorists have been addressed. 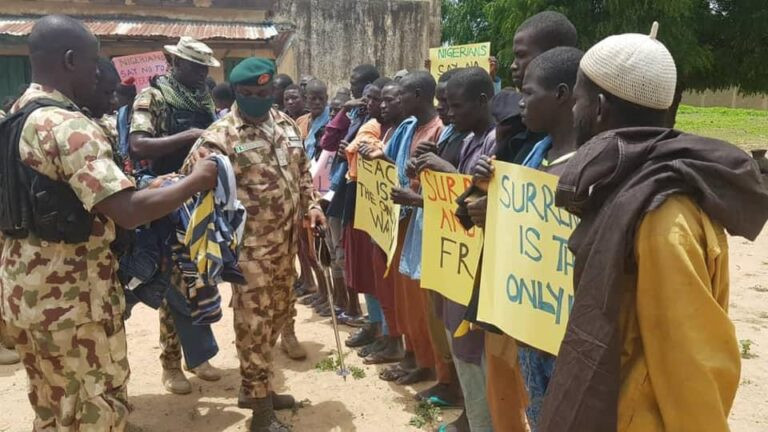 Repentant Boko Haram terrorists
The Nigerian Army has reacted after reports emerged that it is recruiting ex-fighters in the Boko Haram.
The army said nothing of such is happening.
It specifically referenced a video footage on social media where one comedian identified as Young Elder purportedly made attempts to relate the collapse of the Afghan military to the ongoing surrender by the Boko Haram/ISWAP terrorists in Nigeria.
It noted that Young Elder claimed that the surrendered terrorists were going to be absorbed into the Nigerian army.
The statement, signed by the Director of Army Information, Brig-Gen. Onyema Nwachukwu, reads: “While it is understood that the situation in Afghanistan calls for concerns by any right thinking person or organisation, the manner in which the comic Young Elder presented it shows his lack of basic knowledge on the subject he hurriedly delved into.
“The amateurish production conjured some unfounded and baseless claims that only exist in the figment of their imagination, claiming that surrendered terrorists were going to be absorbed into the Nigerian army.
“For the avoidance of doubt, the NA does not have any repentant terrorist joining its ranks and does not have any plan for that.
“There are teaming able-bodied Nigerians that are willing to join the NA to genuinely help in the fight against terrorism and other violent crimes.”
On the fate of the surrendered terrorists, Nwachukwu said they will be received, processed and passed to the appropriate government agencies that were saddled with the responsibility of handling them.
“While we recommend that matters related to security be left with those who have the requisite expertise and experience.
“We wish to remind comic characters like Young Elder to focus on contributing towards nation building and not engaging in a campaign of falsehood,” the Army said
Top Stories