The suspects were arrested by operatives of the Anti-kidnapping section while attempting to kidnap two women. 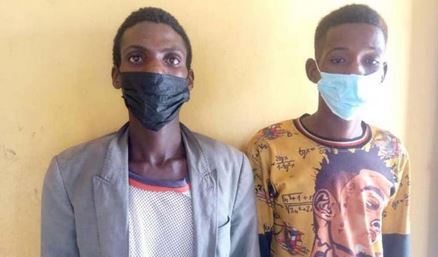 Two members of a kidnap syndicate have been arrested as Operatives of the FCT Police Command foiled a kidnap attempt along Kwali axis of the Federal Capital Territiory.

Spokesperson of the command, Asp Daniel Y Ndirpaya, in a statement issued on Thursday, September 2, said the suspects, Musa Mukailu and Damina Wali, aged 18 and 17, were arrested by operatives of the Anti-kidnapping section while attempting to kidnap two women.

The FCT Commissioner of Police, Babaji Sunday said on interrogation the suspects confessed being members of a kidnapping syndicate.

The police boss said efforts are in place to arrest other members of the syndicate, adding that the Command remains undeterred and firm to ensure the lives and properties of residents within the FCT are protected.

For commendation or report on the conduct of Police Officers, he urged residents to call the Public Complaint Bureau (PCB) Line: 09022222352.

The CP advised that comments and observations should be dropped in any of the police suggestion boxes located at Berger roundabout, Area 1 round about and Federal Secretariat, Abuja.