Girl Allegedly Brutalised By Her Stepsister In Benue (Photos)


Ngohol said she receives beating severally in the hands of her stepsister daily, though not as bad as that of Saturday. 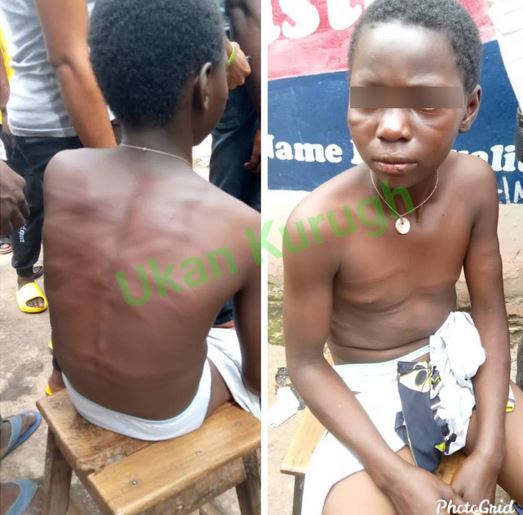 A young girl who was brutalised by her stepsister in Benue state has been hospitalized.

Human rights activist, Ukan Kurugh, who shared the story online, said the young girl identified as Ngohol was rescued on Saturday, September 11 from the hands of her stepsister who allegedly physically abused her.

According to Ngohol, her offense was that she closed the door on the finger of her stepsister.

''At about 2:37 pm, on Saturday, 11th September, 2021, I received a distress call. It was a case of physical abuse of a minor, Ngohol Sonter (exact age not known) by her step sister, Wasen Sonter (names have been changed).

Ngohol was that afternoon severely beaten by her step sister for allegedly not shutting her mouth, thereby revealing happenings at home to neighbours and whoever cares to listen to her.

She was not fortunate that day because concerned neighbours tried to talk her step sister into avoiding the temptation of abusing the little girl. The abuse, which left the minor with bruises all over her body is coming shortly after Ngohol was beaten for allegedly closing the door against the finger of one of her step sister's children.

Angered by words from neighbours, Wasen took Ngohol into her room, closed the door and gave her the beating of her life.

Ngohol said she receives beating severally in the hands of her step sister daily, though not as bad as that of Saturday.

She is on admission in a private hospital Makurdi. Doctors at the facility are suspecting a case of dislocation in one of the hands.

It is a clear case of abuse as it is beyond child's discipline. My boss Dr. Mrs Helen Teghtegh had put a call to NAPTIP who came and picked the lady in question to their office while the girl is to continue with her recovery and we are possibly gonna be handing her over to the agency tomorrow officially when she is discharged.'' 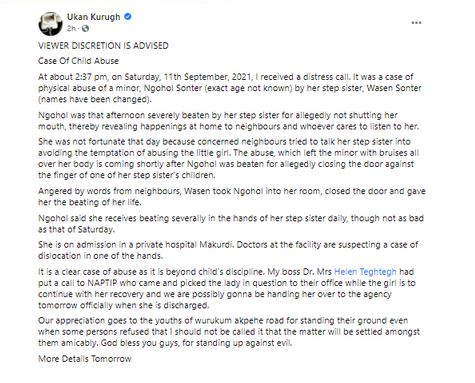 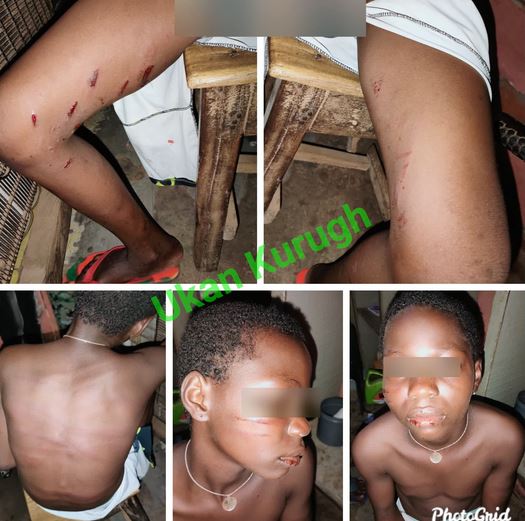