The late priest is said to be priest-in-charge of St Andrew’s Anglican church, Ihitte-Ukwa in Orsu Local Government Area of Imo State. 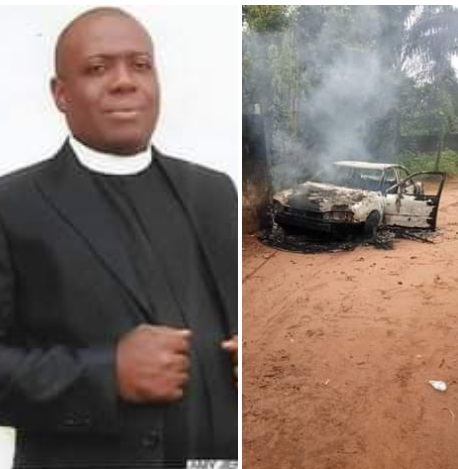 Merenu
Some unknown gunmen have snuffed life out of Reverend Emeka Merenu.
The late priest is said to be priest-in-charge of St Andrew’s Anglican church, Ihitte-Ukwa in Orsu Local Government Area of Imo State.
The priest identified as Rev. Emeka Merenu, serving under the Anglican Diocese of Orlu, was butchered to death in his personage on Tuesday morning, September 14, by assailants suspected to be members of the ESN/IPOB.
It was gathered that the priest, a native of Amaorji in Nkwerre in the Nkwerre Local Government Area of the state, was killed on the unfounded allegation that he brought in soldiers to secure the church and school under his supervision.
A member of the church, who spoke to Punch in confidence, disclosed that the attackers stormed the church premises and butchered the priest.
His vehicle was not spared, as the hoodlums set it ablaze before fleeing thereafter.
"The priest in charge of St Andrew’s Anglican Church in Ihitte-Ukwa in Orsu Local Government Area  of Imo State was killed this morning. His attackers stormed the church compound where he lived, butchered him and burnt his car before running away."
Asked what could be the reason for the murder, the source said, “The church has a school on the premises. His attackers might have been angry that the slain priest was giving security protection to the students of the school who were writing this year’s WASSCE for Senior Secondary schools.”
A senior member of the church in Orlu Anglican diocese who preferred to be anonymous confirmed the incident to Punch, saying that the diocese has been thrown into mourning.
Spokesperson of the State Police Command, Micheal Abattam, who confirmed the murder said that investigation had commenced with the intention to arresting the suspects.