Commissioner of Police, CP Adesina Soyemi, stated this on Friday in Lafia while parading the suspect and 60 other suspected criminals arrested for various crimes. 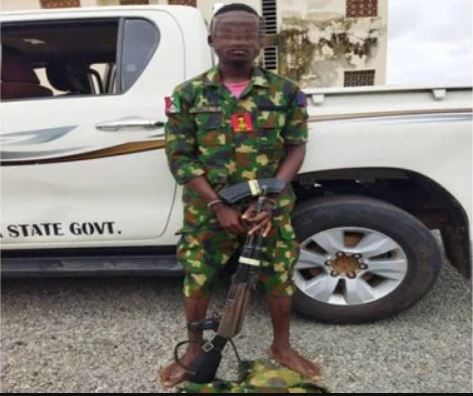 According to a report by The PUNCH, the Nasarawa Police Command says it has arrested one Timothy Emmanuel, an alleged fake military officer who has been intimidating and oppressing residents of Karu and Lafia local government areas of the state.

Commissioner of Police, CP Adesina Soyemi, stated this on Friday in Lafia while parading the suspect and 60 other suspected criminals arrested for various crimes.

He explained that the suspect, who is an indigene of Plateau State that had been on the watch list of the Police, was arrested along B.A.D Road in Lafia while he was trying to escape in a black Toyota Corolla vehicle with Abuja number plate BWA 973 CD suspected to have been stolen.

“One Timothy Emmanuel of Bakin Chiyawa village, Quanpan LGA of Plateau State, a fake military officer who has been on our watch list has been arrested by officers of the Police command.

“The 28-year-old suspect was wearing a military camouflage and was in possession of an AK-47 rifle with two magazines.

“The suspect was never enlisted into the Army but got the uniform from his uncle who is a military personnel serving in Borno State.

“I have directed that further investigation into the matter should be carried out at the State Criminal Investigation Department in Lafia,” CP Soyemi added.

The Commissioner of Police also paraded some suspects who are alleged to have vandalised railway tracks from Jenkwe Development Area of Obi LGA and were conveying the commodity to an unknown destination in the state.

“In continuation of the fight against rail track vandalism, Police operatives of the anti-kidnapping unit, led by CSP Anietie Eyoh, while working on credible intelligence, intercepted a truck without number plate which was conveying vandalised rail tracks stocked in two container bodies.

“The suspects confessed to the crime but further investigation will be carried out on the matter,” he said.