The Acting Controller of the state command, Alhaji Chedi Wada revealed this to the News Agency of Nigeria (NAN) on Friday in Katsina. 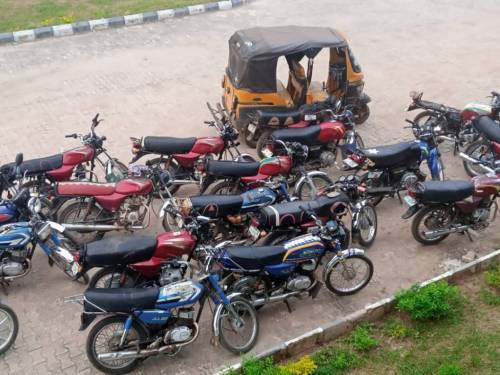 According to a report by the News Agency of Nigeria, the operatives of the Nigeria Customs Service (NSC) seized no fewer than 202 motorcycles from suspected bandits and other criminals in Katsina State between August and September.

The Acting Controller of the state command, Alhaji Chedi Wada revealed this to the News Agency of Nigeria (NAN) on Friday in Katsina.

Chedi said that the motorcycles, mostly Boxers and Jencheng models, were intercepted around forests close to borders.

“We suspected that the motorcycles were used for conveyance of petrol, food items and smuggled items to bandits in the forest.

Wada said the command is working tirelessly to guarantee that no contraband or illegal item is brought into the country through any of the borders in the state.

“The fight against banditry, kidnapping, cattle rustling and other forms of crimes and criminal acts in the state and the country in general is a collective effort.

“The customs service, like any other security agency, also has a stake in it.

“Here in Katsina state, we are determined despite all odds; we will make sure we assist to bring the bandits and other criminals to their knees,” Wada said.

Terrorists Who Tried To Oust Me Are In Nigeria - Turkish President