The sad incident happened on 28 July 2021 in Eburutu Barracks Calabar. 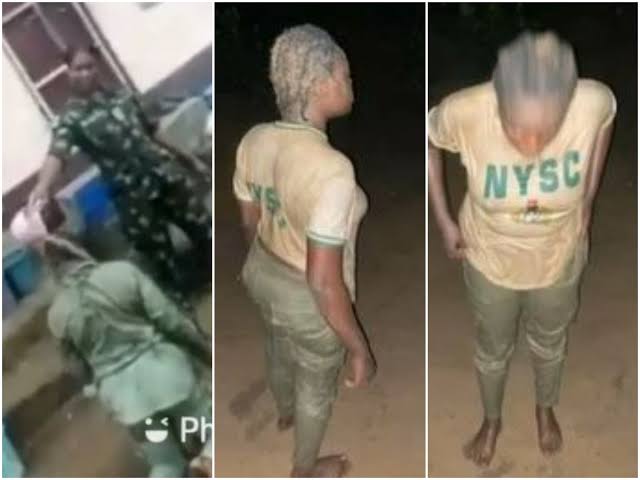 Fidelia
The corps member, Ezeiruaku Ifeyinwa Fidelia, serving at the 13 Brigade headquarters in Calabar assaulted by a female Army officer, Lt. Chika Viola Anele after an argument has given details on what really happened.
The sad incident according to the corper, happened on 28 July 2021 in Eburutu Barracks Calabar and surfaced on social media after two months.
Narrating the story, Fidelia wrote:
On the said date i got to the venue early and while i was there, i saw one of my Captain friend who arrived quite early to the venue and on seeing him, i tap him and then we exchange pleasantry, only for Lt. Chika Anele to shout on me that i shouldn't touch an officer on uniform. After scolding me, I went back to my position and I was standing there, another officer came and he was offering me an handshake, I told him that they said we should not shake an officer on uniform, so wen the started sharing small chops, and Lt. Chika was in charge of the small chops.
I went further to share the small chops to the invited guests and some officers, so one major now called my attention and said that he mistakenly pour his small chops on the ground that I should change it for him, I told him that it was finished and that the ones he's seeing there are for the umpire but he insisted, and me not knowing what to do, I now went back to Lt. Chika and explained to her what the Major request was about, she started insulting me that I was senseless, that was I not there when she told me that the reserve ones are for the umpire??
Before that, she had given me one to keep that when ever we were hungry we could eat, she now ordered me to go and bring that one and change it since I don't have sense, and go and give it to the Major, I quickly went and changed it for him.
After the event ended, she called me and started insulting me again that she doesn't know why I'm behaving like I don't have sense and that, is it that I'm senseless So angrily I went to the other side of the barracks where I met an officer who saw my countenance and requested to know why my face was that way.
So I explained to him that the way some officers are talking to the corpers I don't like it, and he insisted on knowing who provoked me, I now told him that Lt. Chika insulted me, that I don't like the way she spoke to me, He now said to me that he was sorry and apologize on her behave. So we left.
On the 28th day of July, Lt. Chika called for a meeting that we should all assembly at the basketball court, which all of us did.
She now brought me out and told corp members that I was the reason why she called this meeting, that me I went to tell a senior office that if not for Nigerian Army uniform if I see her outside will she talk to me??
She now started comparing and she asked me Which school I graduated from, my CGP and the Course I graduated from, I told her, she now asked my fellow corpers "is there any comparison between a graduate of Unilag and Madonna University?? Nobody answered her.. She now asked me to go and put on my NYSC Uniform, we call it 6 over 7. She said I should go and put it on.
When I got to my room I found out that my menstruation just started, so I had to washup before dressing up, I now went to washup, when she waited for me she now called one of the corpers to come and check on me,
So the girl came and I told her that I was coming that I was washing up, the girl went and told her that me I'm bathing, angrily she came to my room were I was dressing up and she was like, " I told you to go and change and you where using it to bath, she order the corpers to fetch water for her, when the got the water she asked them to get sand..........
Watch video below:
Top Stories