The Defence Headquarters (DHQ) disclosed this while briefing Defence Correspondents on military operations in Abuja. 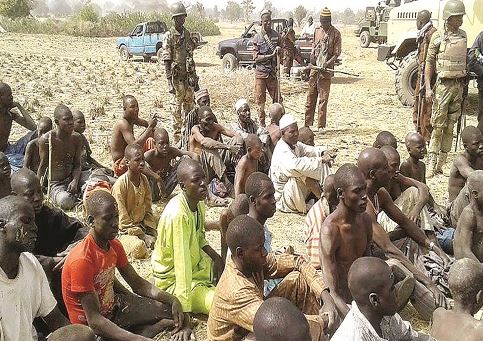 A total of 2,783 terrorists and their families have surrendered to the Nigerian military troops in the Northeast and North-West respectively.

The Defence Headquarters (DHQ) disclosed this while briefing Defence Correspondents on military operations in Abuja.

The Acting Director of Defence Media Operations, Brig-Gen Benard Onyeuko, said a total number of 391 terrorists and armed bandits were killed across the country in the last one month while 103 others were arrested and a large cache of arms and ammunition recovered.

In the North East theatre, he said troops had several encounters with terrorists in different locations, adding that 85 BHT/ISWAP were killed while 43 including collaborators were arrested.

He said the troops recovered 121 assorted weapons including SMG, HK21 guns, AK-47 and locally-made rifles with magazines, 3,372 rounds of 7.62mm NATO/Special ammunition, locally made pistols and smooth body grenades, RPG-7 bombs as well as 12,250 bags of fertilizers and 178 rustled livestock among several other items.

In the North West, he said 240 armed bandits were neutralised, 125 assorted arms including AK-47 and FN riffles and Dane guns as well as 1,166 rounds of 7.62mm special/NATO ammunition, 1,304 livestock and 54 motorcycles among other items were recovered within the period.

He added that 53 armed bandits were killed during air bombardments on criminal enclaves in different locations including Magami and Dansadau forests in Zamfara State.

He stated further that troops of operation Whirl Stroke killed 15 armed bandits and recovered 23 AK-47 rifles with magazines as well as 66 rounds of 7.62mm special and 39mm ammunition.

He said the Armed Forces of Nigeria and other security agencies will not rest on their oars in the fight against criminalities in all parts of the country.