National Spokesperson for the Service, Deputy Comptroller of Customs, Joseph Attah, disclosed that the seizures were made in two phases with two suspects arrested. 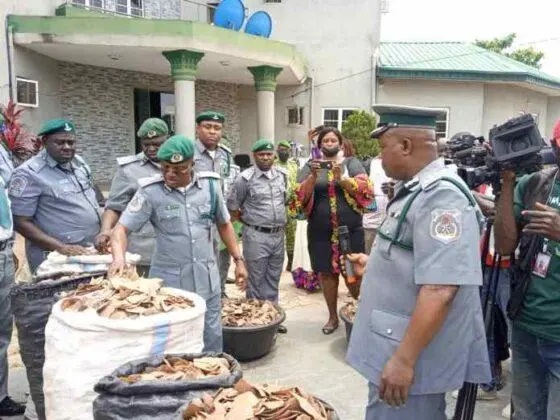 The seizure was recorded in Lagos
The Nigerian Customs Service has announced the seizure of pangolin scales and claws worth a staggering N1.7 billion.
The arrest was made by the Comptroller-General Strike Force Unit, Zone A, Ikeja-Lagos.
Speaking with journalists in Lagos, Southwest Nigeria, the National Spokesperson for the Service, Deputy Comptroller of Customs, Joseph Attah, disclosed that the seizures were made in two phases with two suspects arrested.
“Even though this criminality is not essentially a Nigerian thing, sadly some foreigners with active connivance of few Nigerians are bent on using our dear country as a transit route for illegal wild life trade.
“You will recall that the Nigerian Customs Service, acting on credible intelligence provided by our international partners, announced wild life seizure with arrested suspects currently facing prosecution.
“In the course of further investigation to arrest other members of the gang, we received another credible intelligence from same international partner, Wild Life Justice Commission, and swiftly deployed our intelligence operatives with the Strike Force as a SWOT team, led by South-West Zonal Coordinator, Deputy Comptroller of Customs, Ahmadu Shuaibu.
“They intercepted of One (1) Mercedes Benz Bus with registration number BGT 256 LG along Kudirat Abiola Way Oregun lkeja, Lagos,” he said.
Giving a breakdown of the seizures, Attah, who represented the Comptroller General of Customs, revealed that the bus was found containing a total of 1,009.5kg of seized items in addition to one (1) sack of Pangolin Claws of 5kg, being a total of 1,014.5kg with Duty Paid Value (DPV) of over N1.7 billion.
“Two suspects, Mr Salif Sanwidi and Mr Sunday Ebenyi, have already been arrested in connection with the seizure . “They will also be charged to court to answer for their crime.
“…For the avoidance of doubt, illegal wild life trade contravenes Section 63 “e” and ”g” of CEMA Cap 45 LFN 2004. Nigeria is a signatory to Convention on International Trade in Endangered Species of Wild Fauna and Flora. As responsible member of the global community, we cannot allow our nation to be used as a conduit pipe for illegal trade on wild life.
“We remain committed to the quarterly meeting with embassies of USA, UK and Germany and welcome on board other international organizations that are joining the fray.
“We commend Wild Life Justice Commission for their continued strong commitment to this course through provision of credible and actionable intelligence, including technical aids. NCS appreciates this working synergy and looks forward for more, “We call on members of the Public to support the Service by providing timely information that will help us cripple this criminal network of illegal wild life trade through our country.
“As a Service, we give assurances of strict confidentiality and swift action(s) that will yield positive results as in this instance case,” he concluded.
The Federal High Court, sitting in Lagos had earlier ordered the remand in the custody of the Nigerian Customs Service (NCS) five persons, who were accused of trying to export N22.3 billion worth of pangolin scale and elephant tusk seized by the same Strike Force Team A.
The five accused persons include: four Guinean Nationals and a Nigerian. Three of the accused who were present in court were arrested in Lagos in August 2021 by officials of the Nigerian Customs Service.
The accused who were identified as Troare Djakonba, Muyribein Bereye, Mohammed Berete, Sediki Berete (Guinean) and Isiaka Musa were arraigned before Justice Tijjani Rigim of the Federal High Court, Lagos on a four-count charge.
However, Muyribein Bereye and Sediki Berete were not in court as they were said to be on the run. But counsel to the Nigerian Customs Service told the court that effort was ongoing to ensure their arrest.
The Nigerian Customs Service National Spokesman, Deputy Comptroller, Joseph Attah, showcasing the seized items while other officers watch in Lagos.
Top Stories