One of such schools is Maryamawa Primary School at Kauran Mata Village. The school is one block of four classrooms which houses primary one to primary six. 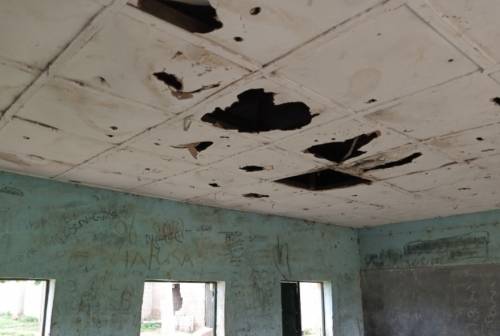 It has been revealed that in Madobi Local Government Area in Kano State where Rabiu Musa Kwankwaso, the former governor of the state comes from, public schools have fallen into dilapidation, according to SaharaReporters.

One of such schools is Maryamawa Primary School at Kauran Mata Village. The school is one block of four classrooms which houses primary one to primary six.

To make room for all the pupils, primary one to four take morning classes while five and six are scheduled for afternoon classes.

Some of the pupils sit on bare cement floor while others come to class with mats and sacks which they spread on the floor as the school does not have chairs and desks.

Whenever it rains, the classes are flooded from the decaying roofs, adding to the hardship of the pupils.

In Farindawa Government Primary School, another public school in Kauran Mata, the school has not been renovated for many years.

The school is also a single block of five classrooms with collapsing ceilings and broken floors. Cracks appear in between the walls.

A teacher who spoke on the condition of anonymity said the government had refused to intervene in the school.

“Since this particular community is not within the metropolis of Madobi Local Government Area, most development doesn't reach us at all," he said.

"We are used to it,” said Abdullahi Mutkhar Farindawa who is a student at the school. “Sometimes we come to school and all we see is a single teacher, not enough teachers in the school. They teach us what they feel like teaching and we close school for that day."

He said in Hausa, "I am a primary 4 student. I don't understand English. Sometimes, we just come to school to play and sing."

The school is a single building with five classrooms. Despite the availability of land in the school premises, the government has failed to build more classrooms for the students.

"We are calling on the government to intervene because there is no quality education here. Since their children are not attending the schools, they don't care about the children of the voters who put them in power," said Musab Salisu, a community leader.

In Danyana Government Primary School, the premises have been turned into farmland. The inhabitants of the community plant and harvest different cash crops and vegetables on the school land.

A farmer, Mukathar Aliyo said, "Of course we are farming on the school land. For a long time, we have been farming and nobody has questioned us. Whenever the government is ready to build classes, we won't farm again on the land because we also need development and our children also need it."

The school is a single block with five classrooms. However, each class is divided with zinc to make room for an additional class in a single classroom. This improvisation has resulted in 10 classes altogether.

"We are more than 30 in the class. The learning condition is unfavourable because there is no ventilation and we are choking in the class,” said Musa Amir DanYana, a pupil.

"I go to school not regularly because I hawk peanuts for my parents,” DanYana continued. “I want to be a pilot in the future, but there are not enough teachers in the school. There are only three teachers, sometimes they leave us alone to make noise and play, whenever it is closing time, we walk home."

This report was produced in partnership with Civic Media Lab School Report, an initiative to improve the state of public schools in Nigeria, with support from the MacArthur Foundation.