BBNaija Ike had taken to his social media page to share photos of his fellow reality star wearing dirty clothes while sitting on the floor. 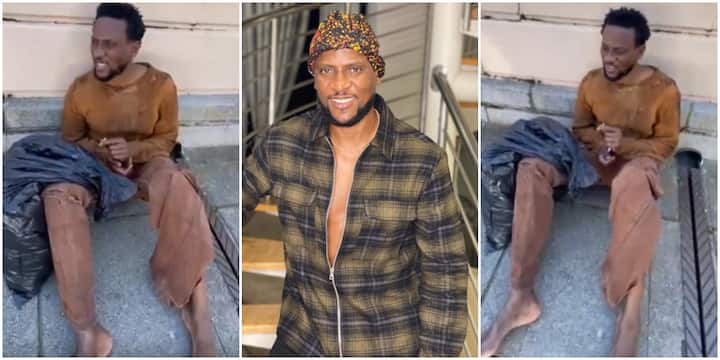 Omashola
The true story about a video that surfaced yesterday showing BBNaija Pepper Dem ex-housemate, Omashola on floor and wearing dirty clothes has been told.
For all those worried, Omashola is not a homeless person. The short video circulated was actually a skit.
Recall that BBNaija's Ike had taken to his social media page to share the video raising alarm that Omashola could be in danger.
A critical analysis of Omashola's Tiktok page by TORI.NG's Alexander Thandi Ubani showed that it was all planned.
Omashola took to his TikTok page to share a video of him changing into new outfits and looking clean. One of the photos showed the reality star wearing same dirty clothes which made Ike raise alarm on social media.
In the new skit video released by Omashola, he could be seen changing different clothes by clapping his hands.
He changed from his dirty clothes to a camo outfit and so on.
So Nigerians should worry no more because it was all staged.
Watch first video of Omashola in dirty clothes:

See the recent video showing it was all a skit: