An eyewitness Adekunle Raji, whose mother sells her ware at the spot where the gas leakage occurred affirmed to The PUNCH that the ongoing road project caused the gas leakage. 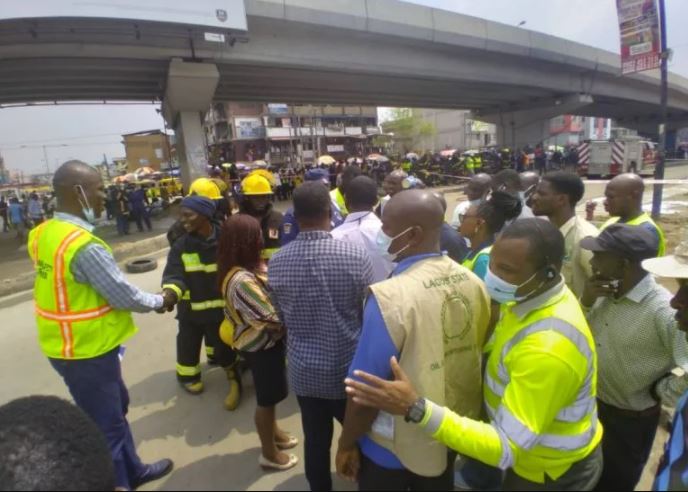 Scene of the gas leakage

According to a report by The PUNCH, some eyewitnesses at the Ikeja gas leakage have revealed that the cause of the incident is due to the ongoing road rehabilitation in the area.

When The PUNCH visited the scene of the gas leak which is under Ikeja bridge, some houses and shops along the road had been partially demolished. It was gathered that the government plans to expand the road, hence the gas leakage this morning.

Moreso, there was the presence of the Nigerian Police Force, Nigerian Army, Lagos State Emergency Management Agency, Lagos State Fire Service, Manufacturing Association of Nigeria Fire Department, among others on the ground.

An eyewitness Adekunle Raji, whose mother sells her ware at the spot where the gas leakage occurred affirmed to The PUNCH that the ongoing road project caused the gas leakage.

He said, “I am a trader here and to my own knowledge, this is the first time something like this would happen. They said they wanted to widen the road so they demolished some structures. While they were doing that, I think they made a mistake and hit a pipeline and it was not repaired. They are still doing the road rehabilitation.

“People always trade here and nothing like this has ever happened. This is the first time this kind of thing will happen. This particular place that it happened is where my mother sells her wares and I also assist her. The leakage has affected our business immensely.”

Another eyewitness who simply identified himself as Jeremiah Kuffrey, stated, “The leakage was due to the ongoing road project. They ought to have informed the gas company about the road rehabilitation for them to stop gas from running through these pipes. The partial demolition of the buildings is because they want to expand the road. When the incident happened, the gas was gushing out but the right authorities were informed and they came here hurriedly. That is why you can see them all on the ground. It started since in the morning.”

Further speaking with The PUNCH Emmanuel Oladotun Ismail, the Manufacturing Association of Nigeria Chief Fire Officer further explained, “There is a road expansion project happening here and the gas leakage is definitely due to the ongoing project. It was after the demolition of the buildings that people realised that there is gas leakage. They began to perceive the odour of gas and it has really spread, which means that covered this whole environment. Gaslink who runs the gas through the pipes has shut it so we are waiting for the remaining gas to be exhausted by the consumers. When it has been exhausted, we will know what to do.”

Speaking on the efforts made by the Lagos State Fire Service, an Assistant Chief Fire Officer, Lagos State Fire and Rescue Services, who refused to reveal his name stated that the matter was under control.

“As you can see, it is a gas leakage, we received the call past 7 am this morning. They informed us that there was a gas leakage under the bridge in Ikeja so we quickly activated our men and when we got to the scene, we discovered the area where the gas is coming out from. We quickly evacuated the people and cordon the environment so that there would not be any obstruction. The white substance on the ground is called Chemical Foam Compound. It is what we use to blanket the surface, this will neutralise the leakage so that there would not be an occurrence of fire outbreak.

“I have our men moving around to educate the people in the environment so that they can suspend anything that has to do with naked fire so that it does not jeopardise our efforts. MAN fire service is here to complement our effort so that is what we have done here for now. We have called the people in charge of the gas line and we have been assured that it has been shut so that there is no passage of gas through the line. However, there is no way we will not perceive it due to the one left in the pipeline. We are on top of the situation,” he said.