Speaking at the launch which held on October 6, Sanwo-Olu had said the objective is to address causes of building collapse in Lagos. 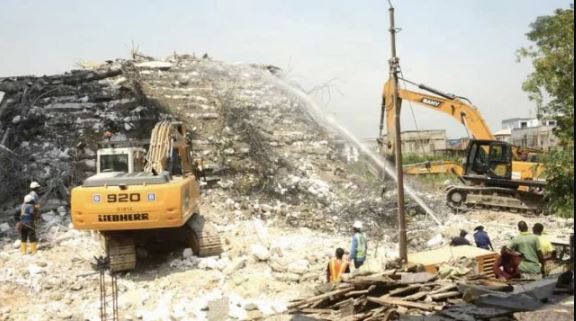 Scene of the Ikoyi building collapse

It has been revealed that less than a month before the collapse of the 21-storey building in Ikoyi on Monday, Babajide Sanwo-Olu, governor of Lagos, had launched a “rebranded” certificate of completion and fitness for buildings in the state, according to TheCable.

Speaking at the launch which held on October 6, Sanwo-Olu had said the objective is to address causes of building collapse in Lagos.

“This event is a testimony to our determination to address incidents of building collapse, by ensuring that due processes are followed in physical development activities in a way that will usher in new practice and bring about saner environment devoid of avoidable loss of lives and properties,” he had said.

“The launch of the certificate of completion and fitness for habitation is one of the moves to further strengthen our resolve to control building collapse incidents. This is a game changer in building control strategies as it portrays us a government that thinks ahead and that is concerned about the safety of lives and properties of the citizens.”

Sanwo-Olu had also empowered the Lagos State Building Control Agency (LASBCA) with the mandate of issuing the certificate to all existing and new buildings.

As recovery efforts at the Ikoyi site enter day four, with over 30 people — including Femi Osibona, owner of Fourscore Homes, the developing company in charge of the property — found dead, the cause of the collapse is yet to be determined.

Meanwhile, there is a controversy over the approval for construction of the collapsed Ikoyi building.

Gbolahan Oki, the suspended general manager of LASBCA, had said Osibona got approval to construct only 15 floors.

Oki, who was temporarily laid off due to the incident, had also said the owner of the property had been previously arrested, adding that the materials he used for the building are “so inferior and terrible”.

However, Obafemi Hamzat, deputy governor of Lagos, had said the approval was for 21 floors, but added that following the issuance of approval three years ago, the building was sealed by LASBCA recently when some “anomalies” were observed.

“As a matter of fact, if you are aware, this location was sealed about four months ago. It was sealed because our agency came in to do structural tests and saw some anomalies. So they shut it down for those things to be corrected,” he said.

TheCable had earlier reported how Osibona resisted the sealing of the building by officials of LASBCA with the help of the police in 2020.

In the now viral video, the developer was aided by police officers who shot into the air to disperse the officials of LASBCA and onlookers.