The suspects were arrested during a raid on their training camp in Ogudu-Sanfield area of the state on Wednesday, November 10. 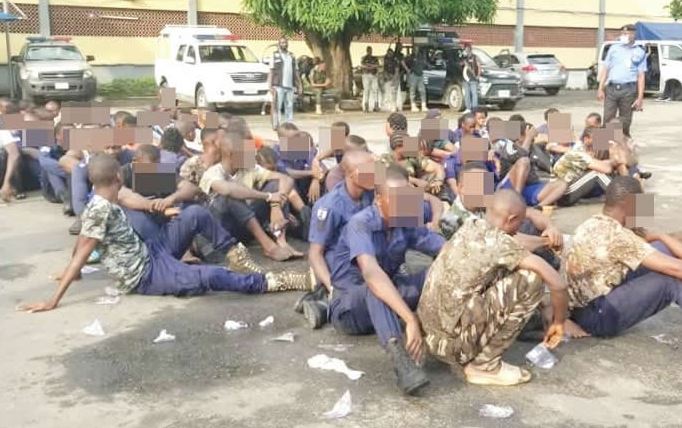 108 suspects allegedly posing as men and officers of the Nigerian Navy have been arrested by the Lagos state police command.

The suspects were arrested during a raid on their training camp in Ogudu-Sanfield area of the state on Wednesday November 10.

Parading the suspects, Lagos state Commissioner of Police, Hakeem Odumosu said the commanding officer of the training camp, Sunday Dakare was also arrested. It was alleged that the suspects were operating under the name of the Nigerian Merchant Navy, also called the Coastal Defence.

“On November 10, 2021, around 11am, the Lagos State Police Command raided the illegal training camp of the Merchant Navy located in the Ogudu-Sandfield area, Lagos State, and arrested the Commanding Officer, Sunday Dakare, 47, together with 107 suspects currently on training.

“I wish to inform you that there has been credible actionable intelligence on the illegal activities of the Merchant Navy following which the command embarked on intensive surveillance of the camp and its activities therein. Consequent upon intensive monitoring of the camp and its operators, the command carried out a well-coordinated overt operation at the training camp in the early hours of today.

“During the raid, which was coordinated by the operations department of the command, the following items were recovered: several military accoutrements, including camouflage badges of ranks, a flag, a signboard and ID cards. Other items recovered include recruitment letters, promotion letters, a portrait of the commanding officer, two motorcycles, one plasma TV, three cutlasses, criminal charms and other items.”

Odumosu who asked members of the public to be wary of people posing as military personnel to carry out illegal operations in the state, noted that the Federal Government had outlawed the Nigerian Merchant Navy. He also revealed that the group had been operating illegally since 2005.

“This trend portends danger for our nation and a threat to peace and security. It, therefore, behoves us as a law enforcement agency to enforce the law banning activities of the illegal military outfit. I want to use this medium to warn other individuals or groups still operating such illegal outfits in any part of the state to close it forthwith.

“The police will not hesitate to clamp down on them and their operators and bring them to book."

Speaking to journalists, one of the suspects identified as Kehinde Islamiat said her father asked her to join the operation.

“I don’t know how much was paid; I am not even sure he paid and I have been with them for seven months. We are still expecting the Federal Government to pay our salary. Everything about this stuff is online; we are expecting the government to answer our prayers for our rifles and patrol vans.”

The arrested commanding officer of the camp, Dakare said;

“We just got small shanties where we can relax; we have no block, we have been there for over 10 years, we have been recruiting ourselves and waiting for the Federal Government.

“Just like civil defence, we have been waiting for the Federal Government; we have done first and second reading and the third reading is on, so we are waiting; that was why we gathered ourselves there.”

Exhibits recovered include promotional letters awarded to some of the persons recruited into the scheme.

One of the letters which was reportedly signed by one Rear Admiral I. Agaba and dated August 21, 2021, read;