The fire was said to have started from the engine compartment of the truck and the driver had to reverse the truck to avoid ramming into the television station. 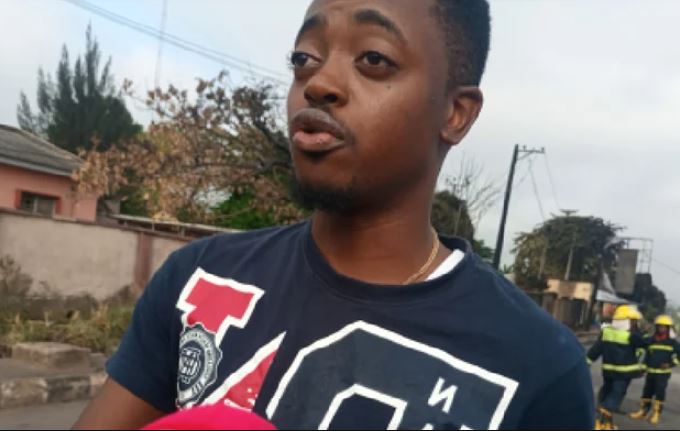 Tolani Kolade, one of the car owners who lost their vehicles to the tanker fire in Ibadan, Oyo State, on Thursday night has narrated how he escaped being burnt to death by the petrol-laden tanker which caught fire at the NTA Road, Ibadan at around 8pm, according to The PUNCH.

The fire was said to have started from the engine compartment of the truck and the driver had to reverse the truck to avoid ramming into the television station.

The driver, who identified himself as Tolani Kolade, told The PUNCH at the scene of the incident that he saw that the tanker driver was in distress and was driving backwards while ascending the hilly road.

He said, “I am a Bolt driver and my car was completely burnt. The truck was ascending the hill and I was at the back some few metres away. When I saw that the tanker was coming backwards, I abandoned my car and ran out to save my life. Luckily I escaped but my car was destroyed by fire. But I thank God.”

It was learnt that although the truck was burnt completely alongside two cars, no life was lost and nobody sustained any injury. Fire fighters were commended for their prompt response to put out the fire.

Workers at the television station who were on duty when the incident happened said they remained grateful that the truck did not crash into the station’s premises.

Men of the Oyo State Fire Services led by the Director of Operations, Ismail Adeleke, who continued their work at the scene on Friday, splashed water into the tanker to drain fuel remaining in the tanker.

Governor Seyi Makinde was said to have visited the scene at around 8am. The scene of the fire incident is about 150 meters away from the entrance of the Oyo State Government House where the governor lives.