The Minister of Justice and Attorney-General of the Federation, Abubakar Malami who gave the update while talking with journalists. 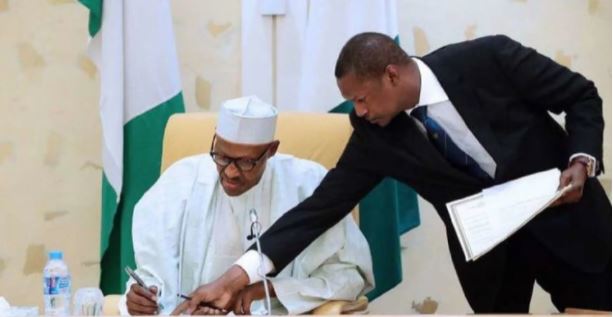 Buhari and Malami
The Federal government has given an update on when it will name those sponsoring terrorism in Nigeria.
The Minister of Justice and Attorney-General of the Federation, Abubakar Malami while giving an update on the matter, said the list contains names from Nigeria and some other countries.
He said the government was only taking its time to ensure all due processes are followed before the names are made public.
“One thing that I think you need to take into consideration is that investigation is still ongoing and the fact that a lot of arrests were made.
“With the fact that judicial orders for the detention of those that have been arrested have been obtained, it is indeed out of place to conclude that nothing is being heard on the matter.
“Work is in progress. It will continue to be in progress and certainly we will do the needful at the right time,” Malami stated on Wednesday during an interview with Channels Television.
The AGF assured that work is in progress, some arrests have been made and at the appropriate time, the details of those involved but locally and internationally will be made public as no one will be spared.
“The fact remains that we have ever been working. There is no dull moment as far as the process is concerned. So, what I am saying in essence is that it is work in progress. Arrests were made, judicial orders were obtained and, indeed, we will do the needful,” Malami said.
Adding that “no one will be spared as far as we are concerned as a government.”
Top Stories