The man is seen on video pacing outside building in Tudor City, along the East River. The incident was reported at 10:39am at the bus stop at the intersection of E 42nd Street and 1st Ave. 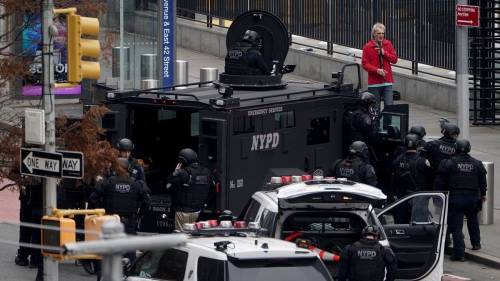 US Police officers with the New York Police Department are in an armed standoff with a man wielding a shotgun outside the United Nations building, police reported.

The man is seen on video pacing outside building in Tudor City, along the East River. The incident was reported at 10:39am at the bus stop at the intersection of E 42nd Street and 1st Ave.

The white man assumed to be in his 60s has grey hair and is wearing blue jeans, a light blue shirt under a red sweater and tan jacket. He is seen holding the barrel of the shotgun to his head, according to Dailymail.

Police were heard saying, “Put down the gun. There are better ways to get your message out.”

Officers had their guns trained on him as they issued their warnings and attempted to negotiate with him. The man is reportedly threatening to harm himself. A black bag, red megaphone, glasses, a water bottle, several jackets and several small unidentified objects were splayed out on the sidewalk behind him.

NYPD released a statement assuring citizens that “There is currently NO THREAT to the public.”

Video from the scene shows the man pacing back and forth as he holds the barrel of the gun to his chin.

He is seen holding up a red folder and appears to be talking to someone out of the shot. He shakes his head before standing up and walking towards the direction he was speaking holding the shotgun and the red folder.

NYPD confirmed that they are attempting to establish communication with the armed man but did not report any comments he has made.

Two law enforcement officials say the man was seen muttering to himself and also has what appears to be a bag with him, CNN reported.

The bomb squad has responded to the scene where a heavy police presence has been seen.

NYPD issued a traffic advisory around 11am warning citizens to avoid the area as emergency vehicles were expected to surround the area. Traffic along FDR Drive has been affected.

An estimated two dozen emergency vehicles have responded to the scene.

Helicopters were heard flying over the area and a city bus has been used to block traffic uptown.