However, combined troops responded to distress calls and arrived at the scene immediately only for the bandits to set a house of their victim on fire. 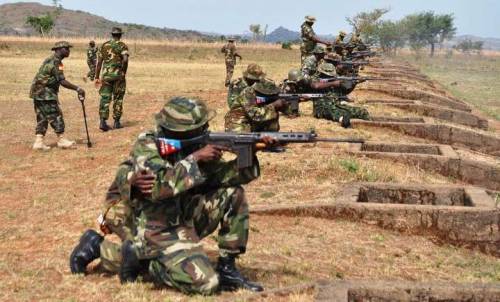 Some gunmen suspected to be bandits in the wee hours on Saturday stormed Sabon Tasha GRA in Chikun Local Government Area of Kaduna State to kidnap innocent citizens.

However, combined troops responded to distress calls and arrived at the scene immediately only for the bandits to set a house of their victim on fire.

A resident in the area who spoke to DAILY POST on Saturday, Didan Auta, said they heard sporadic shootings after which they called the troops, who saved the day.

Another resident told this medium that the bandits invaded the community around 12:30 am.

A resident, who simply identified himself as Benjamin, said the bandits had set a house on fire and were about carrying out a house-to-house raid when soldiers arrived.

“We thank God the soldiers arrived on time if not the story would have been bad because they (bandits) came to pick the house owner but fortunately ‎the house was empty and the bandits set the house on fire out of frustration,” he said.

The Sabon Tasha GRA has been under consistent attack by bandits since the beginning of this month. Youths in the area had vowed to protect themselves.

The Police Public Relations Officer, ASP Jalige Mohammed, could not be reached for comment as his phone was switched off.