Umahi stated this during the State’s annual Thanksgiving Service at the Government House Chapel, Abakaliki, saying the IPOB image-maker lacked both capacity and the warfare prowess to stop Buhari from visiting the state. 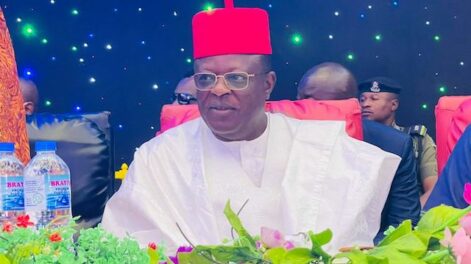 Governor Dave Umahi
Ebonyi State Governor, David Umahi has taunted the Indigenous People of Biafra, saying its threat to stop President Muhammadu Buhari's visit to the state is empty.
Umahi said the group doesn't have the warfare or capacity to stop the President from visiting the state.
Recall that Emma Powerful, spokesperson of IPOB had warned that the group will lock down the South-East region, should the President visit the state.
According to Umahi, Buhari’s visit to the state was already billed for early next year, adding, however, that projects to that effect (in the state), were being executed as if he was to visit this month (December).
Umahi stated this during the State’s annual Thanksgiving Service at the Government House Chapel, Abakaliki, saying the IPOB image-maker lacked both capacity and the warfare prowess to stop Buhari from visiting the state.
Umahi said, “I saw where one misguided element that calls himself IPOB, said Mr President is not welcomed in Ebonyi. He is inconsequential and I want you to put it on social media.
“I was in Paris and I told Mr President that the leaders of the South-East would want to visit him over the issue of peace in the South-East, and I appeal to him to postpone the visit till early next year.
“But I didn’t want to tell our people, because I was urging them to keep pushing our projects as if the President was going to come this year. And I’m not sure up to three or four people knew this; so, I kept it to myself.
“So, Mr. President will come when we want him to come. That IPOB guy is an inconsequential human being. If he is serious, let him hit the wall to Ebonyi State and let him see, if he would find feet to go back.
"Somebody will sit down somewhere and be talking rubbish and they will be misguiding our children to go and be killed; but, himself will not be at the war front.
"Any of them that will talk rubbish about security in South-East, should come and lead the war. And I will also lead the war for Ebonyi State. And like David, we will always kill Goliath.
“When they talk rubbish, just ignore them. This land belongs to God.”
Recall IPOB’s Director of Media and Publicity, Emma Powerful, had in a statement, on Thursday, said the group had intelligence that President Buhari would visit Ebonyi State, threatening to shut down the South-East geopolitical zone, should that happen.
Top Stories