Speaking during an interview on Channels Television’s Sunday Politics, Utomi said that the country has become more corrupt than it was before President Buhari came to power. 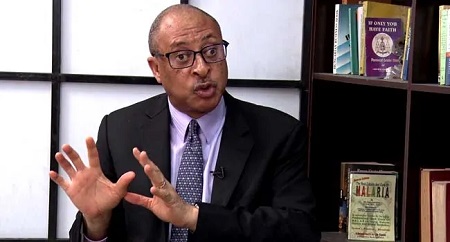 Utomi
President Muhammadu Buhari has been called out for running a very corrupt government.
Former presidential candidate Professor Pat Utomi made the accusation during an interview on Channels Television’s Sunday Politics.
Utomi said that the country has become more corrupt than it was before President Buhari came to power.
The professor of political economy claimed that the Buhari administration has proven to be more corrupt and nepotic than past governments.
He asserted that many well-meaning Nigerians who supported the present government to come into power because of the anti-corruption mantra have now been disappointed.
Speaking on the solution, Utomi said the nation must have a conversation with itself as regards how the country can be saved.
He said: “We have not been able to reform the political process to get money out of politics, to get people who should not be in politics out.
“Politics has been reduced to how do you capture a state and use it for your own aggrandizement. If politics were not about state capture, you will see people who come out to give sacrifices of themselves to achieve immortality of making a difference in the lives of others, but that is not the case as we have seen in our country, sadly.”
Utomi said Nigeria must emulate South Korea and get rid of money politics, adding that Nigerian politicians have no empathy for the masses.
“Nigerian politicians do not have empathy for the people… There is a complete disconnect between the political class and the people.
“Poverty rules the land but do you see it reflected in the lives of the political class? No, you don’t,” he said.
Speaking further, Utomi said President Buhari has failed to lead the nation right, adding that the country at the moment is not being governed.
He added that insecurity and poverty have risen in the last six years of the Buhari government.
“People are dying from insecurity with all the killings every day, more people are killed in Nigeria every day in most of the major civil wars of the world.
“Today we are dying more from Malaria than any other people in the world,” he said.
Top Stories