The Islamic cleric said this at the sixth anniversary of the 2015 Zaria killings of the Shiites. 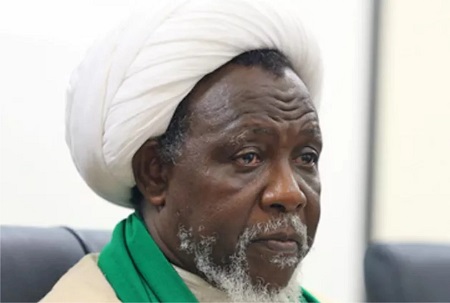 Zakzaky
The leader of the Islamic Movement of Nigeria (IMN), Sheikh Ibraheem El-Zakzaky has taken a swipe at Nigerian security operatives.
According to him, Nigerian security operatives behave like terrorists some times when they are on a mission.
The Islamic cleric stated this at the sixth anniversary of the 2015 Zaria killings of the Shiites, according to Sahara Reporters.
He accused the Nigerian Army of killing over 100 of his followers in Zaria after which their bodies were carted away by the security operatives.
“Men in uniform are sent to unleash terror on people – soldiers, policemen and secret police, who do not wear uniforms. In fact, nowadays, they even wear terrorist garments – meaning, they hide their own faces in the same way terrorists do.
“The state has become an instrument of terrorism, that it has taught the people to be violent. People have been forced, due to circumstances, to become violent, because the state has become violent.
“We are talking about rights. We have to understand that this society can never be in order unless those in authority respect the rights of other people.
“Those in authority think they are the law (or rather) above the law, that they can take the life of anybody at any moment. They care about no amount of talk, preaching or advice; they don’t simply care. They are indifferent to what happens to other people,” he said.
According to El-Zakzaky, in Nigeria, the right to life which is a fundamental human right has been taken away from the citizens.
“This right to life, including other rights, is enshrined in the Nigerian constitution, which those in authority always swear to protect. They swear in holy books they believe in (the Holy Qur’an, and the Bible).
“Alas, we find in present society today right to life is actually taken away. Those in authority think that they have the right to take the life of anyone at any moment.
“Extrajudicial killings have become an order of the day. Instruments of law enforcement that are employed to protect the law are now being used (by those in authority) to violate the law.
“See what is happening now in this society in which everybody seems to be in a state of fear, including those in the authority of course because they would never have peace if other people are not in peace as well! So, the most important right which everybody must protect is the right to life.
“You don’t have the right to take the lives of others; you don’t even have the right to take your own life–nobody has the right to commit suicide. You don’t have the right to commit abortion; because, if your mother had aborted you, you would not have been alive. Nobody has the right to take the life of anybody.
“Similarly, there is the right of environment, there is the right of all the living creatures, including animals; they have rights! The dead also has rights–the right to be honoured after their death with a funeral that is in accordance with their own laws and cultures.
“But, nowadays, you can see, those in authority think that they can kill and even burn the bodies or take them to an unknown destination and bury them in a mass grave.
“The Zaria Massacre which happened six years ago is a case in question, wherein three days the Nigerian Army cordoned the city of Zaria, including all the routes leading to the city, murdered over one thousand people and took all their bodies and bury them in different mass graves. On top of this, they arrested about five hundred people for the alleged ‘murder’ of one soldier. Of course, all the courts have discharged and acquitted all those they had arraigned before them.”
He further accused the government of trying to hide the evidence of the killings in Zaria, noting that the government had already murdered peace when it killed his followers in Zaria.
The Shiites leader added, “See how those in authority want to wipe out even the evidence about the atrocity they have committed. This was the first step this administration took, and you can see, subsequently, how wanton killings become the order of the day.
“Now people are living in perpetual fear everywhere. You can not murder others and expect yourself to stay in peace. They have (by committing Zaria Massacre) already murdered peace!
Top Stories