The robbery incident started at about 3pm on Tuesday and lasted for about two hours as the police operatives tried to repel the robbers. 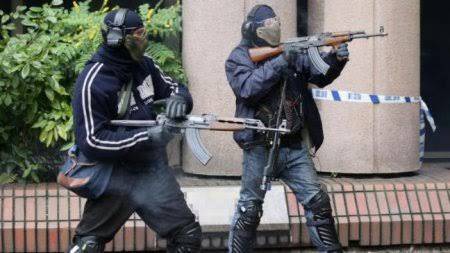 File photo
A robbery attack on three first-generation banks has left three persons dead.
It was gathered that the incident happened in Egbe, the commercial hub of Yagba West Local Council of Kogi State.
The incident, according to eyewitnesses, started at about 3pm on Tuesday and lasted for about two hours as the police operatives tried to repel the robbers.
It was gathered that the armed robbers stormed the town in three different vehicles, headed for two of the old generation banks in a well-coordinated manner and started shooting sporadically while they equally bombed parts of the bank in other to gain access into the bank.
In the ensuing pandemonium, two people were shot dead, including a security guard attached to one of the banks, simply identified as Taiye.
Also, a little girl was killed by stray bullets from the sporadic gunshots.
The Kogi State Police Commissioner, Idirisu Dauda Dabban, confirmed the robbery incident. He declined to give further details.
Top Stories