In the article published in Daily Trust, the London School of Economics graduate said that Kano Hisbah Board harasses the poor and powerless. 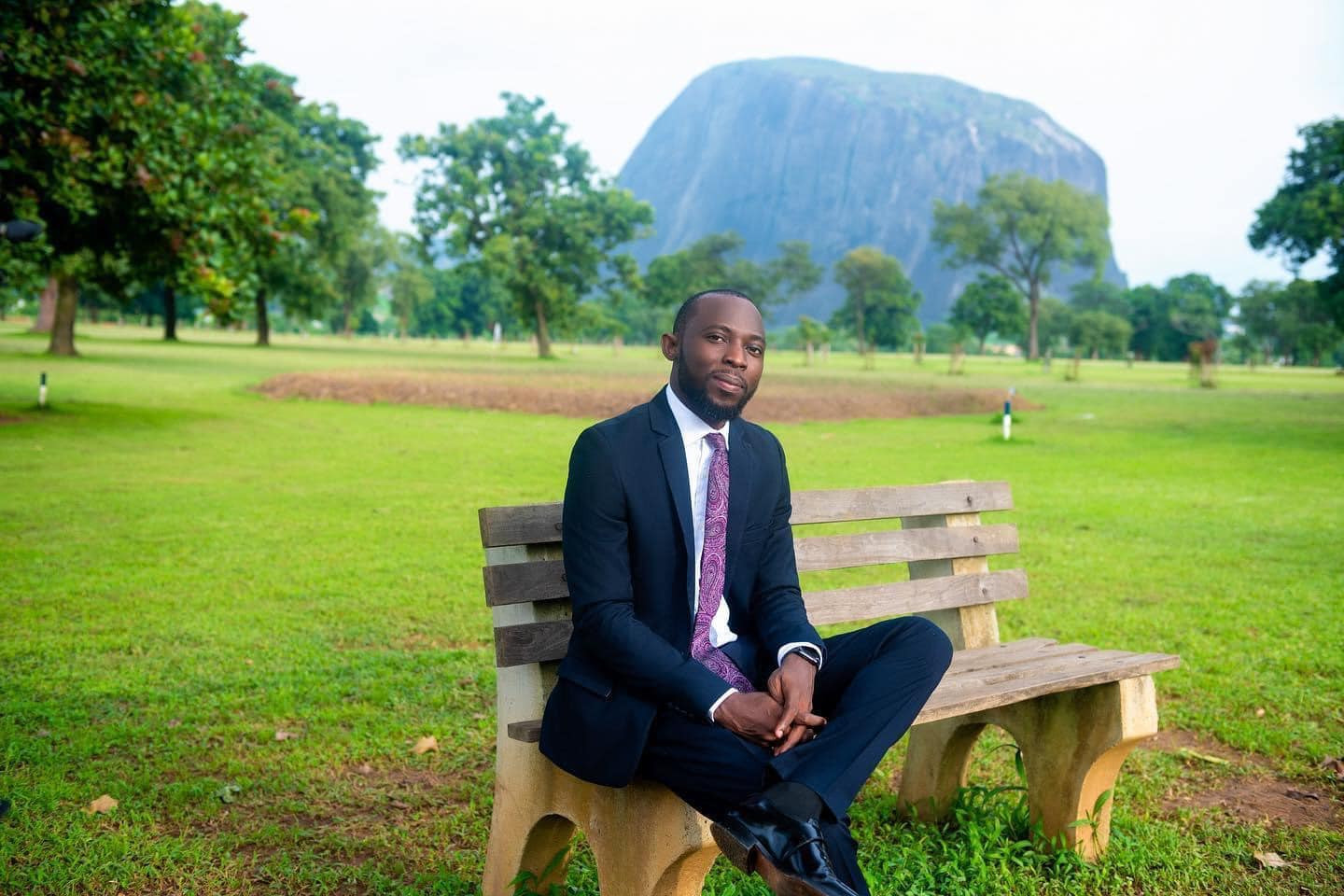 Kakanda
Nigerian journalist and activist, Gimba Kakanda has lashed out at Islamic Police, Hisbah describing it as the 'poor man’s police'
He made his point in an article published in Daily Trust.
The London School of Economics graduate said that Kano Hisbah Board harasses the poor and powerless but remains quiet when the children of the rich live-streamed their “Haram” parties.
The article reads:
"Nothing emphasizes one’s vulnerability in Nigeria as much as being poor, and this has been the reality of the North’s attempts to implement the shariah legal system,"
In enforcing this obsessive hounding and harassment of the poor and powerless, Kano State Hisbah Board stands out and its trending comment on the recent emergence of a hijab-wearing Muslim woman as the winner of the 2021 Miss Nigeria beauty pageant, has it called out for perceived double standards. The same organization was loudly quiet when the children of the rich live-streamed their “Haram” parties from its jurisdiction.
In July, the Hisbah embarked on banning the use of mannequins at fashion houses in Kano, and it’s confusing in a state that even had a Christian-dominated quarter called Sabon Gari.
Around the same period, the group also made the news for punishing a Muslim boy who had stopped praying after being humiliated by the Hisbah corps for rocking an unconventional haircut. They didn’t even pause to reflect on their method, the correlation between their policing of the young man’s morality and their talibanizing dabbling in his private life.
Early in the year, a notable Muslim cleric rattled Kano when he questioned the existence of an all-Christian settlement in the city. This is the society the Hisbah tempt a legion to embrace. But having a sub-national organization so empowered to undermine the rights of citizens, even those to whom the laws aren’t applicable, is scary. This is the reason we also need legislation against unlicensed public preaching to prevent us from the danger of divisive charlatans who threaten our diversity.
But the danger of the Hisbah is this realization that they aren’t a band of charlatans even if they sound and act like one, but a government-approved and funded organisation tasked with enforcing bastardization of a variant of shariah in which Rahama Sadau is vilified for the very “indecency” Governor Abdullahi Ganduje’s daughter was ignored or celebrated, and where Danlami the shopkeeper is punished and humiliated in public for stealing a thousand Naira while the politician caught on tape receiving kickbacks enjoys royal treatment. I’m not for morality policing, but such hypocrisy is disheartening.
That the Muslim society, especially the Muslim North, requires systemic overhaul isn’t debatable. But the series of absurdities being projected as a reform, from sporting an unconventional haircut to having mannequins in boutiques, has only heightened the ridiculing of the Muslim they intend to protect. Anybody aroused by a mannequin doesn’t need redemption from a religion. They need vigorous therapy sessions to fight their perversion or even rehab to restore their sanity.
When, a few days ago, Haruna Ibn-Sina, the commandant of Kano Hisbah, made the news for the plan to invite the parents of the reigning Miss Nigeria, Shatu Garko, who’s just 18 and Muslim, “to talk to them about the actions of their daughter and the fact that what she did is illegal in Islam,” the hypocrisy was easy to point out.
The same organization never kicked when known children of the political elite had their hair and body exposed at wild parties with known venues within their jurisdiction and had never bothered to share what they intended to tell Miss Shatu’s parents: “…to make them know that she cannot continue that path and also stop other girls from copying her”.
The outrage over Shatu’s participation in Miss Nigeria disrupted the North’s promising campaign to amplify the devastations of terrorism and banditry across the region and hold President Buhari to account. The killings and destructions that have wrecked the North were instigated by the abuse of an aspect of Islam the Hisbah should’ve long tamed. Unfortunately, it’s hard to tell the difference between their zealotry and the extremism spiced by Mohammed Yusuf in inventing this Frankenstein’s monster loosed upon the North.
When an individual’s morality and personal preferences trended in a region more than the tragedy killing its people, you know there’s a problem. Shatu is feared as a bad influence to the Muslims in a society that produced Mohammed Yusuf, Abubakar Shekau, and their successors Bakura Doro and Bakura Sa’alaba.
If the Hisbah were sincerely out to project the practice and image of Islam, they would’ve paid attention to the lionizing of Bello Turji, a notorious leader of the terrorist cult operating in the Northwest. The villain is the subject of a trending song by a Hausa musician, who praised his valour that you almost forget Turji is a murderous terrorist.
That a people who have unfiltered access to the Internet and all its warts and movies that promote western countercultures consider Shatu Garko or Rahama Sadau a culprit of our moral decadence is a paranoia taken too far.
A region as socially and economically wrecked as the North should have bigger issues to debate, and the mass killings in Sokoto and others recorded since then are one of a million tragedies. And there’s no way we can ever achieve this unless we learn to see the hypocrisy of the state instruments being deployed to neutralize the poor man’s anger.
The worst of these tragedies is that the poor Muslim has been brainwashed to see organizations like the Hisbah as the protector of his faith instead of a political tool to keep him in check—and oppressed.
So, the success of the Hisbah isn’t just their political recognition, but their appeal to the sentiments of the Wahhabi ideologues in their jurisdiction. Despite their hypocrisies, they still retain the approval of this group, and as long as the politicians too adhere to the sectarian sentiments, this arrangement is here to stay. 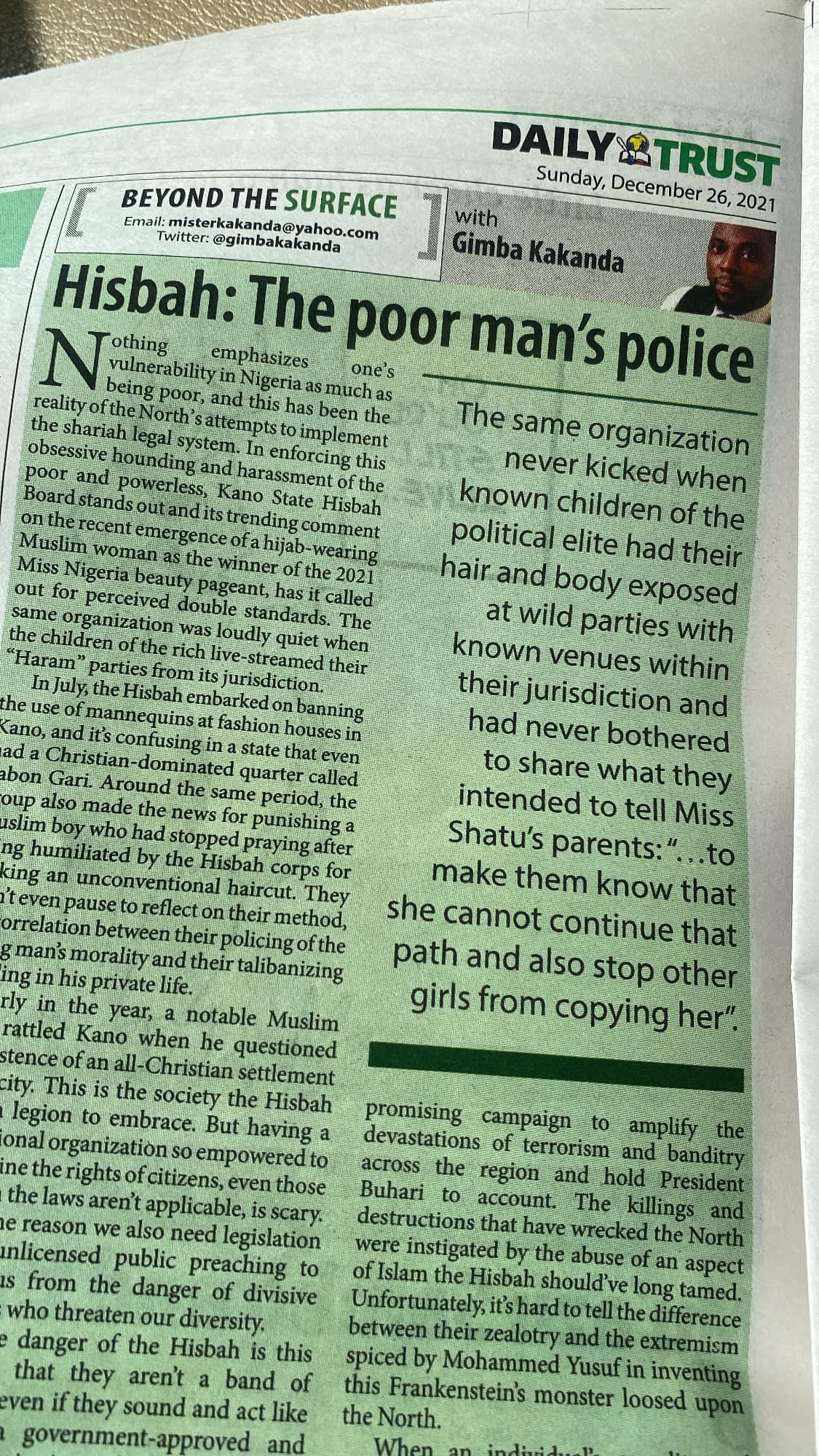