The accident occurred on Sunday around 12.30pm at Itako, Ijebu-Ife, in the Ijebu-East Local Government Area of Ogun State. 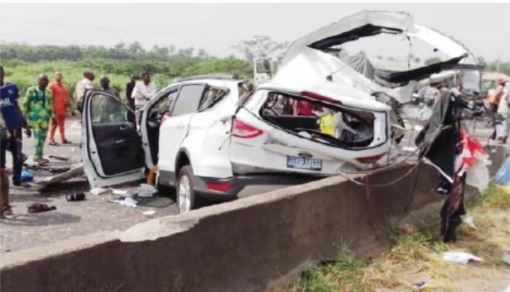 Scene of the accident
A Ford SUV has rammed into a stationary Dangote truck from behind along the Sagamu-Benin Expressway, Ogun State killing a woman and her two daughters.
The accident occurred on Sunday around 12.30pm at Itako, Ijebu-Ife, in the Ijebu-East Local Government Area of Ogun State.
The truck had the number plate, WW 630 XA, while Ford had the number plate AKD 311 HH.
The SUV had four occupants, including the driver, who was employed by the family of the victims.
The Public Relations Officer of the Ogun State Traffic Compliance and Enforcement Corps, Babatunde Akinbiyi, in a statement, said the accident was caused by speed and loss of control.
He said, “According to eyewitnesses, the Ford SUV was on its way from Lagos to the East on vacation when it rammed into a stationary Dangote truck from behind due to speed and loss of control.
“It was gathered that the driver of the vehicle was driving the late woman and her two daughters to the East on holidays when the unfortunate crash happened.
“The husband of the woman stays overseas and the driver was employed as the family driver.
“However, the accidented vehicles have been taken to the Ijebu-Ife Police Station for further investigation.
“The bodies of the three casualties were deposited at the Goshen Hospital’s morgue.
“While TRACE commiserates with the families of deceased, drivers are urged to eschew speed and dangerous driving, particularly during this harmattan season, when there is much dust haze in the atmosphere, in view of its attendant consequences.”
Top Stories