It was gathered that Ogundola was the commander of the notorious unit of the Nigeria Police Force, the Special Anti-Robbery Squad (SARS) before it was disbanded last year after #EndSARS protests. 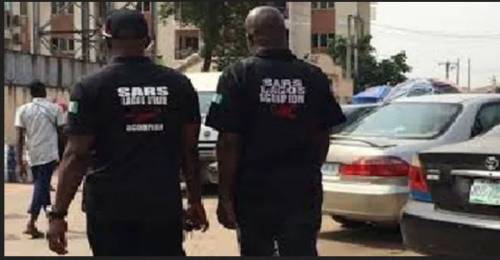 CSP Marcus Ogundola, the commander of the Rapid Response Squad (RRS) unit of the Ekiti State Police Command, and operatives under the unit have been accused of unlawful killings, arrests, conversion of suspects’ properties to personal use, and demand of “outrageous bail sums in exchange for people’s freedom”, according to SaharaReporters.

SaharaReporters gathered that Ogundola was the commander of the notorious unit of the Nigeria Police Force, the Special Anti-Robbery Squad (SARS) before it was disbanded last year after #EndSARS protests.

Speaking with SaharaReporters, some residents said the current RRS unit is made up of former SARS operatives.

“They are cashing out big time with police uniform by extorting the youths of Ekiti State in the name of chasing 'Yahoo boys' (Internet fraudsters). The OC RRS, CSP Marcus Ogundola drives one of the latest Benz in town, GLK to be precise,” a resident told SaharaReporters.

“He was in the news during the bye-election that was bloody in Omuo-Ekiti earlier this year. He was inside the same vehicle that brought those thugs that killed a woman and three others.

“He works for Governor Kayode Fayemi, not the Nigeria Police Force. He was the former OC SARS, Ekiti State before the #EndSARS protest. That SARS unit was not disbanded in Ekiti because it is the same set of people that formed the new RRS now.

“When he was the OC SARS, he had Ogindan, aka White lion as his 2ic; Deji, aka DJ SARS; One Iku Raymond, Omo Ode; a policewoman, Catherine aka Iya Eji, Chief and Omo Oba. All these names and appellations were for his guys when SARS was still functioning but guess what, they are all working with him at the RRS unit.

“The commissioner has no power over him because he was the one that took him to Fayemi when he first landed in Ekiti earlier last year. The RRS office has been moved out of police headquarters to Fountain hotel along Iyin Road just because Fayemi wanted Marcus Ogundola to be free to do what he likes.”

Speaking with SaharaReporters, another resident accused the RRS operatives of assault, torture and ill-treatment.

“In Ado today, the fear of RRS is the beginning of wisdom,” the source said.

The deceased, who was attached to Odo Ado Police Station, was said to have died on the spot.

“He actually came home to eat; his wife has a shop around Aba Ebira in the polytechnic community. There is this bad spot along the road, beside the silo. So the deceased came to his wife’s shop to eat; he came with one of his friends’ motorcycles. He was working at Odo Ado which is not that far from here.

“The RRS operatives were in two Hilux vehicles chasing a Benz. I don’t know where they were chasing the guys from. As they were about to overtake the Benz, the deceased, who is popularly known as Baba Ada, was coming from the other side and one of the vehicles hit him. He died immediately,” a source had told SaharaReporters.

However, the spokesperson for the state police command, ASP Sunday Abutu, denied the allegations.

"What we know is that RRS operatives are after cultists, dangerous people in the town and they go for operations when they receive distress calls. They don’t just go on operations, like what happened in Ikole that day. All I know is that criminal elements won’t want that squad to exist. If anybody has any allegation against them, our hotlines are out there. They should tell us instead of going on social media to raise any allegation."