The suspect was arrested after two people lodged complaints against him. 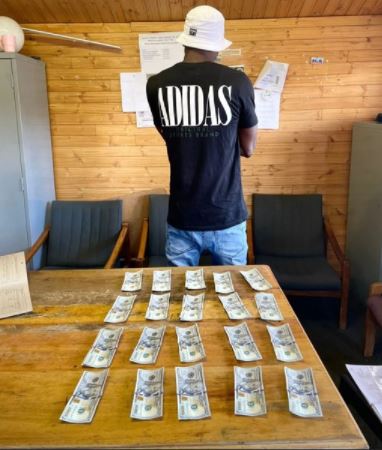 The suspect after his arrest
Police officers in South Africa have apprehended a Nigerian man in possession of fake US dollars.
He was arrested at the Harrismith taxi rank on Thursday, Free State police said.
The suspect was arrested after two people lodged complaints against him.
On Thursday at about 13:30, a member of the public stopped a police vehicle belonging to members of Public Order Police Unit Task Team outside the Harrismith police station and told them about being allegedly defrauded by a foreign national.
"The members calmed the victim and assisted him," police spokesperson Warrant Officer Mmako Mophiring said.
Mophiring added the officers took the complainant to the Harrismith taxi rank where he pointed out the suspect.
"When seeing the police, he tried to run but the members were too fast and apprehended him. He was taken to the police station."
When they arrived at the police station, the second complainant was already there. He pointed out the suspect as the same person who also defrauded him.
Top Stories