During the visit on November 19, 2021, Buhari had told them he would not want to interfere in the running of the judiciary but said he would consider their demand though “a heavy one.” 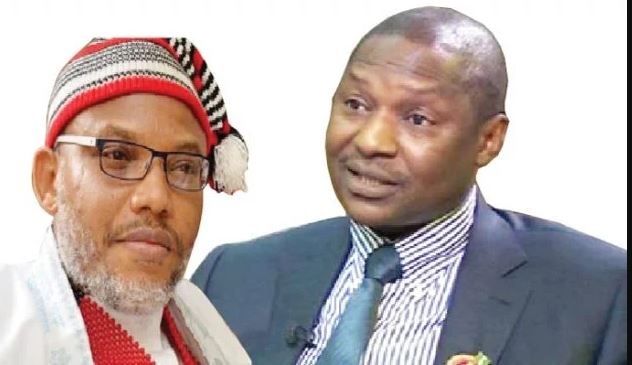 Abubakar Malami (SAN), the Attorney-General of the Federation and Minister of Justice, says the President, Major General Muhammadu Buhari (retd.), will consider the interest of over 200 million Nigerians before he grants the request for the release of the leader of the proscribed Indigenous People of Biafra, Nnamdi Kanu.

Malami spoke on Tuesday as a guest on NTA’s Good Morning Nigeria Show monitored by The PUNCH.

The PUNCH had earlier reported that some respected Igbo elders led by Minister of Aviation in the First Republic, Chief Mbazulike Amaechi, visited the President in Aso Rock and requested the unconditional release of the detained secessionist leader.

During the visit on November 19, 2021, Buhari had told them he would not want to interfere in the running of the judiciary but said he would consider their demand though “a heavy one.”

Malami had also on November 10, 2021, said a political solution cannot be ruled out to resolve the crisis surrounding separatist agitations in Nigeria but later made a U-turn and said the option is not on the table yet.

Asked on Tuesday about the request by the Igbo leaders, the AGF said Buhari would consider the interest of over 200 million Nigerians before he takes any decision.

The minister also said the President considered public interest as against the interest of sectional groups when he refused to assent to the Electoral Amendment Bill.

Malami said, “By way of general statements to the two issues presented: the issue relating to electoral bill and the issue relating to Kanu and by extension, IPOB, what I can tell you for certain is that the decision of the President is based fundamentally and at all times on public interest consideration.

“In the art of governance and what I have come to learn about the mind and heart of the President, Muhammadu Buhari, is to consider the 200 million as against the limited people.

“By extension, the issue of Kanu, what would as well govern the decision of the President in terms of whatever request is presented is the public interest as against limited sectional interest of it.”

Kanu, 54 from Abia State was first arrested in 2017 for demanding the secession of the South-East zone from the Nigerian State.

However, he jumped bail in June 2018 before leaving for the United Kingdom, though he said that he fled because his life was no longer safe in Nigeria.

Upon his re-arrest in June 2021, Kanu was re-arraigned before Justice Binta Nyako for terrorism-related charges brought against him by the AGF office. Kanu has since been remanded in the custody of the Department of State Services in Abuja while his trial is to continue on January 18, 2022.