James Brown Brags About Spending N5M On This Dress (Video)


Crossdresser, James Brown has bragged on social media that he spent a whopping N5 million on a dress just to attend a birthday party. 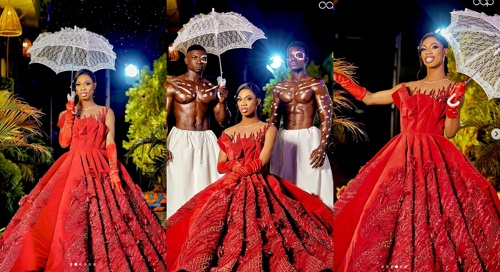 James Brown and his team
Popular Nigerian cross dresser, James Brown has revealed that he spent a whopping N5 million on a dress just to attend the wedding of a friend.
The crossdresser bragged on his Instagram page after attending the birthday celebration of prominent social media influencer Papaya-X.
James Brown was dressed in a scarlet gown and escorted by two capable young guys.
The males were dressed in traditional garb.
James wore an umbrella, as if he were the ‘Princess of Africa,’ as he claims.
“Maison La Pearl” designed the dress James Brown wore.
He wrote;
“Crown Princess. I’m so proud of myself, Rocking a 5m Naira Dress is not easy I’m truly a princess”
See video below:
Top Stories